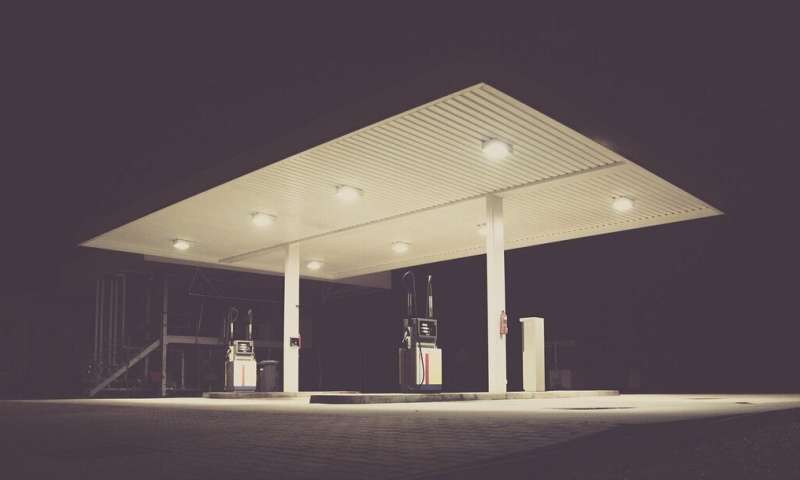 Those of us who drive regularly are keenly aware of gas prices and their daily fluctuations. Many of the factors that influence the price per gallon — the cost of crude oil, regional taxes and processing and transportation charges — affect all pumps in a given area. Why then do some stations charge more for fuel than others in the same general geographic location?

This was the question UC Santa Barbara geographers Alan Murray and Jing Xu sought to answer when they conducted their survey of gas prices in Santa Barbara County. Using a spatial analytic framework incorporating exploratory spatial data analysis, remote sensing, geographic information systems and spatial statistics to explore data from the real-time gas price app Gas Buddy, they investigated how the locations of these pumps could influence the prices they charge.

“We were interested in looking at the spatial features in and around stations, and whether there was any predictability to pricing variation,” said Murray, who with Xu authored a paper in the Asia-Pacific Journal of Regional Science. Over the two weeks of their study, the researchers examined features related to land use and socioeconomic conditions, performed onsite observations and assessed the individual stations’ proximity and connectedness to features of the built environment, such as roads, shopping centers, schools and other gas stations.

A few of the results confirm what we all might intuit: Proximity to highly trafficked areas can influence higher gas prices.

“You’re always going to pay for convenience,” Murray said. Stations near shopping centers (within 2.75 miles) and major thoroughfares tended to charge relatively higher prices, likely targeting shoppers and visitors who were already there for another reason.

“People usually do not travel just for gas,” Xu said. “We travel for work and for school, and we’re filling our tanks while doing other things.” This could explain, for instance, why one station in the Santa Ynez Valley near a small local airport might have relatively lower prices than a counterpart in the same vicinity that is closer to shopping and restaurants, she said. “The one with higher prices is likely to provide more direct access to food and goods.”

Among the factors that might dampen prices, according to the researchers, is a rural or relatively less urban location, the presence of a carwash or convenience store, ownership by nearby supermarkets and proximity to other gas stations, which indicates market competition. In fact, the nearby presence of market competition is among the most significant determinants of pump prices, and can override the effect of proximity to nearby food and goods.

“Modeling-wise, the pricing behavior of one station is not independent of others,” Murray said. “What we found is that the pricing of your closest competitors matters in terms of your own pricing behavior.” This happens irrespective of whether the station is a major brand or a lesser-known retailer, he added, and despite the notion that major brands offer “better” gas (though it is also true that major brand stations generally price their gas higher than minor brand stations).

The researchers found some interesting outliers in their survey. Among them is a gas station in Carpinteria, which, while located closer to the center of town, charged more than its counterparts closer to the 101 freeway. That pricing could be taking advantage of its proximity to the business and tourist district, they surmised.

“If you’re just coming up the coast, it’s one of the most populated areas you first encounter, and it’s in a beach community,” Murray said.

But by far the biggest outlier is a gas station located in western Goleta, situated just off the 101 freeway, whose prices were roughly 68 percent higher than the county average. At the time of the study, that equated to about $2 more per gallon than other stations in Santa Barbara County.

“We were very interested in price gouging behavior,” said Murray, who defined it in this case as taking unfair advantage of a location to set excessive prices. Indeed, the station in question has good freeway access, and is the last major gas brand along the freeway between western Goleta and Solvang.

“You have sort of a captive market,” Murray said. One of the local characteristics is its location near Dos Pueblos High School, where “young drivers maybe don’t appreciate” the huge discrepancy in gas prices, he added.

“You also have this traffic coming off the 101, going over to Home Depot and Costco, so you have a mix of people that are patronizing the local area and are therefore captured on their journey to goods and services,” Murray said. All this, he noted, despite the fact that the surrounding suburban neighborhood is relatively less affluent than other, more expensive neighborhoods that have gas stations with more average pricing. This is an important point, he added, in the sense that “this higher, predatory pricing might be impacting certain socioeconomic groups more than others.”

Deeper investigation revealed that the markedly higher prices at that station in western Goleta might also be turning away customers. Onsite observations demonstrated that the majority of visitors to the gas station came from the 101 freeway, supporting the speculation that the target customers are those coming from the highway. The researchers noted that most of the customers either limited their purchases to items from the convenience store or they left the station without buying anything.

Gas station owners have myriad reasons for choosing to set their prices one way or another, and not all of them are location-specific. But this study, the researchers say, “offers a first attempt at detecting normal gasoline pricing behavior, and the spatial factors associated with these conditions.” As they note in the paper, “The hope is that this work provides government agencies, urban planners and policy makers with capabilities to investigate regional gasoline price variation and potential gouging behavior.”

Nearly Half of Americans Have Had a Family Member Jailed, Imprisoned

Social and Behavioral Sciences for the Intelligence Community