There is no doubt that the COVID-19 crisis is affecting the U.S. economy and labor markets in an unprecedented way. The leisure, hospitality and retail industries have been hit the hardest by shutdown orders nationwide but new research that uses data from Homebase, a time-tracking software, to provide real-time employment estimates shows that the report by the Bureau of Labor Statistics, expected later this week, may not capture the full extent of the contraction.

Andre Kurmann, associate professor in the School of Economics of Drexel University’s LeBow College of Business, Etienne Lale of the Universite du Quebec à Montreal and Lien Ta, a Drexel doctoral student, analyzed data from Homebase to come up with real-time estimates of the COVID-19 crisis on U.S. employment and hours worked.

They found that employment in leisure, hospitality and retail trade contracted by an estimated 19.8 million – from 32.3 million in mid-February to 12.5 million by the end of April – a staggering 60% decline. Most of this decline occurred in the second half of March as stay-at-home orders came into effect.

The researchers also found that about 6.7 million or one-third of the employment decline is due to businesses shutting down, and that remaining employees in continuing businesses saw a 10% reduction in their weekly hours. 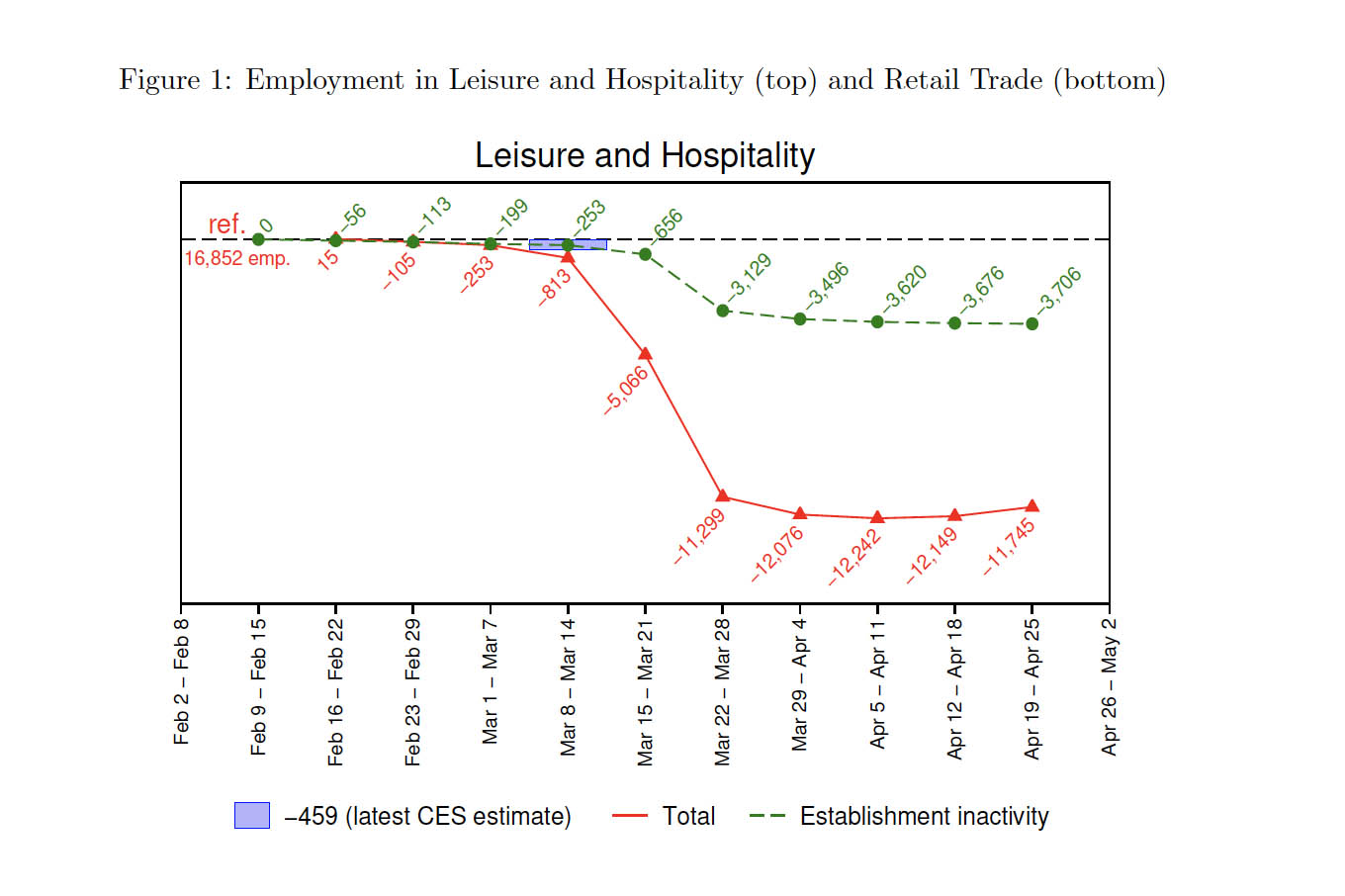 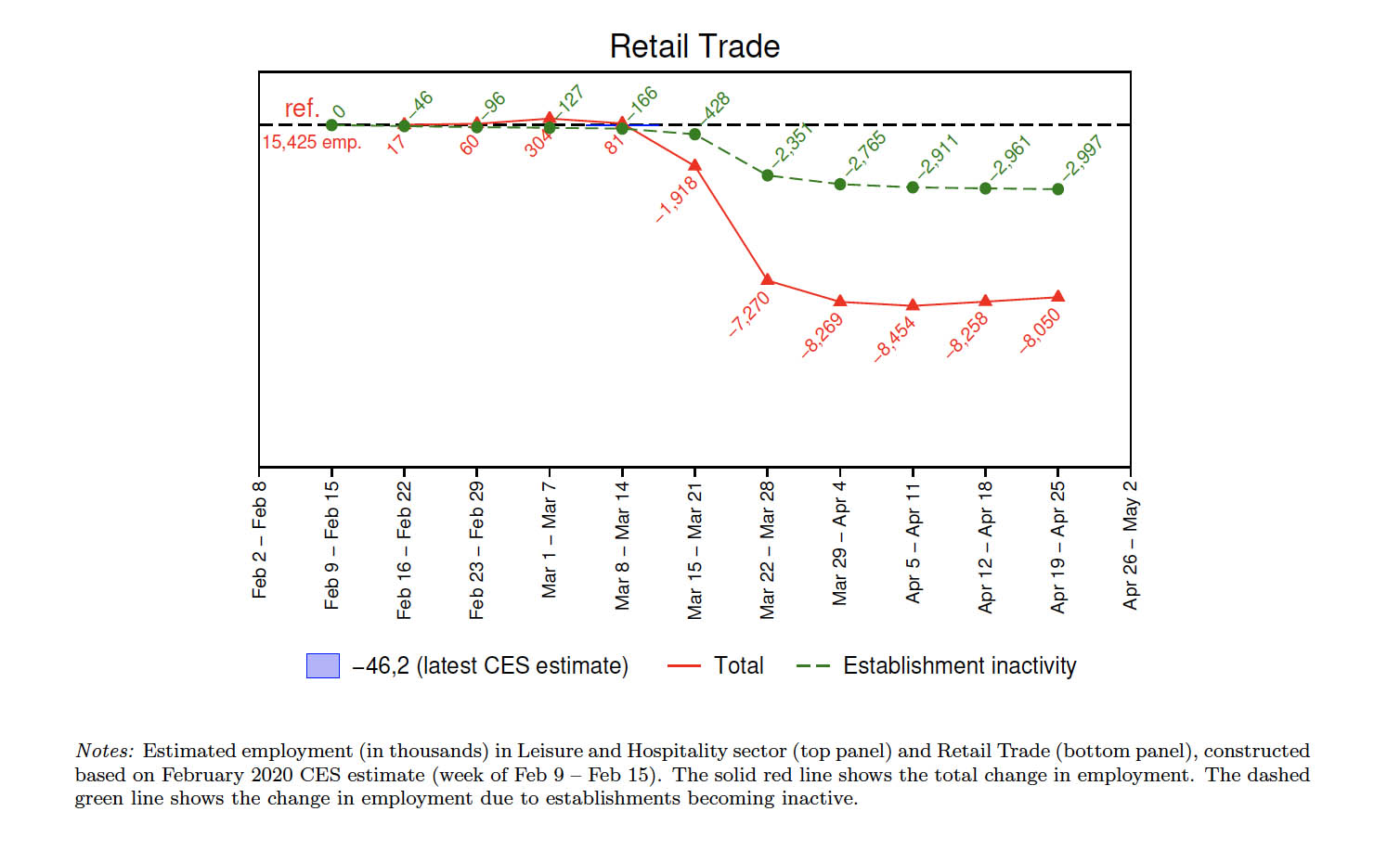 While the contraction in the two sectors is dramatic, there are some first glimmers of a recovery. As of the end of April, about 15% of inactive businesses have returned to activity, and weekly hours worked and employment have started to increase.

The results of the analysis contrast with the latest estimates by the BLS that pertain to mid-March, before most of the effects of the crisis were felt, according to the researchers.

“With the COVID-19 crisis unfolding with tremendous speed and affecting labor markets in such an unprecedented way, it’s all the more important to have timely and accurate measures of the actual impact,” Kurmann said. “The results imply that the employment losses reported by the BLS in its March report, though large by historical standards, show only the tip of the iceberg and we should expect much worse estimates in the April report due to be released this Friday.”

The analysis also highlights the importance of taking into account the negative employment effects of business inactivity. Historically, the BLS estimates from its establishment survey (Current Employment Statistics) adjusted for this so-called net birth/death effect only indirectly based on past data. In the current situation, where many of the businesses have at least temporarily shut down, this adjustment is no longer appropriate, according to the researchers. The BLS recently announced on its website that it will modify its birth/death model with the April report but hasn’t provided details on how the methodology will change.

According to Kurmann, it could be a year from now — after the BLS has processed and analyzed data from the census of all businesses — until we will know the full extent of the coronavirus outbreak on employment, which is why it’s important to have at least estimates of the current situation.

“Our report complements a number of concurrent efforts to measure the real-time impact of the crisis on labor markets,” he said. “We provide a direct estimate of establishment inactivity and, going forward, the extent to which the U.S. labor market is starting to recover as restrictions are lifted and the economy opens up again.”

At the same time, the researchers caution that the Homebase data does not come without limitations. The majority of workers tracked by Homebase are hourly employees and the company’s clientele consists mostly of small businesses, which account for about half of total employment in leisure, hospitality and retail. The Homebase data does not capture the response of larger companies to the crisis, but the report shows that even under conservative assumptions about the employment decline among larger businesses, the estimated employment loss in leisure, hospitality and retail amounts to 16.5 million – still a staggering number.

The researchers plan to continue providing real-time updates to their estimates with the latest data from Homebase. Their future plans include tracking the extent to which inactive organizations return to activity, as well as tracking whether or not furloughed or laid off employees return to their previous positions. Plans also include using real-time data to assess the impact of COVID-19 on other industries, as well as producing estimates for various regions throughout the country.

The Impact of COVID-19 on U.S. Employment and Hours: Real-Time Estimates With Homebase Data