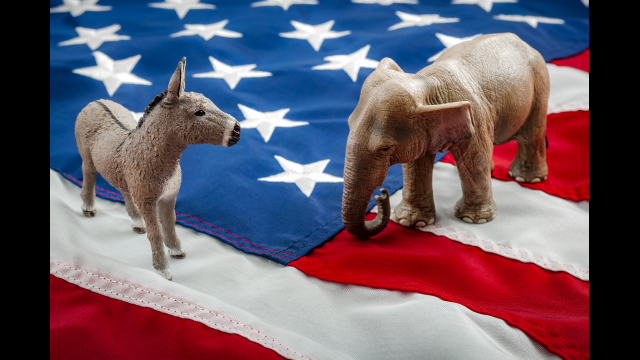 Facebook political memes of Donald Trump in the 2016 election were more likely to focus on his hairstyle and facial expressions, while those of Hillary Clinton were more likely to center on the email scandal and her relationships — a contrast to historical gender stereotypes in politics, a Baylor University study has found.

Previous research indicates that typical coverage of male political candidates focuses on their policy and history in office, while coverage of females focuses more on their personality and appearance as a frame for their ability to hold political office in terms of their roles of mothers and wives.

Facebook-meme pages and profile photos, used by grassroots groups in the most recent election, also were more likely to be negative in tone, said lead researcher Mia Moody-Ramirez, Ph.D., director of graduate studies, director of American studies and professor of journalism, public relations and new media in the Baylor’s College of Arts & Sciences.

The research article — “Analysis of Facebook Meme Groups Used During the 2016 US Presidential Election” — is published in the journal Social Media + Society.

“This study is one of the first to offer a glimpse at the type of Facebook pages that emerged during the political race, profile photos use, popularity of the pages and an examination of how citizens used humor during the 2016 election,” she said. “With the 2020 presidential election on the horizon, it is important to understand the impact of memes, which are easy to create and share on social media platforms.”

Previous studies of U.S. presidential candidates emphasized newspaper and television portrayals, and “traditionally, media outlets have operated simultaneously as gatekeepers and interpreters of political themes by selectively choosing to cover one or both sides of an issue, often putting forth their own interpretations,” Moody-Ramirez said. “Our findings indicate Facebook political-themed meme pages enable average citizens to bypass traditional gatekeepers … This is important because Facebook’s large membership base allows users to share ideas with a large audience that, at one time, might have remained isolated.”

Following the 2016 election, dozens of Facebook-meme pages spotlighted Trump and Clinton, with more emphasizing Trump (92 pages) than Clinton (53 pages), according to the study. Moody-Ramirez and co-researcher Andrew B Church, adjunct lecturer of journalism at Baylor, examined an equal number of Clinton- and Trump-themed pages for a sample of 106 pages — 53 for each politician. For equal analysis, Trump’s top 53 pages were included in the sample.

Trump Facebook page profile photos questioned his physical features — such as hairstyle and skin tone — as well as political and leadership skills. One photo referred to the gospel song “We Shall Overcome” in the caption “We Shall Overcomb” with an image of Trump’s hairstyle, the study noted. Pages frequently referred to popular culture icons, TV shows and movies — a common tactic for memes, researchers wrote, noting that some memes referred to the TV show “Orange Is the New Black” to comment on Trump’s tan.

Researchers evaluated the overall sentiment of the pages — positive, negative or neutral — based on the content of the profile picture, whether one of Clinton, Trump or another person. Facial expressions were coded as digitally distorted, goofy, happy, official photo, serious or none; sentiment was coded as pro-Clinton or pro-Trump; anti-Clinton or anti-Trump; neutral; or other.

Researchers found that in general, Facebook-member pages feature profile photos in which the two candidates appeared serious, with the next most common being happy. Another prominent expression was goofy, featuring memes in which the candidates made absurd faces or expressions that tended to elicit humor.

Further study of meme pages could be of value, researchers said.

“Researchers may consider adding a survey or in-depth interview component to the study of memes to gauge if the popularity of memes plays a role in how journalists cover politics,” Moody-Ramirez said. “For instance, the popular memes featuring former President Barack Obama and Vice President Joe Biden received widespread media coverage following the 2016 election. News outlets spotlighted the memes of imagined conversations between Biden and Obama as the two transitioned out of the White House.”

Future studies also might include interviews with the creators of user-generated content — or memes — to find out their motivation for creating such content, she said. Previous studies have indicated that the creation and sharing of such content can be cathartic in a politically charged environment, such as an election.