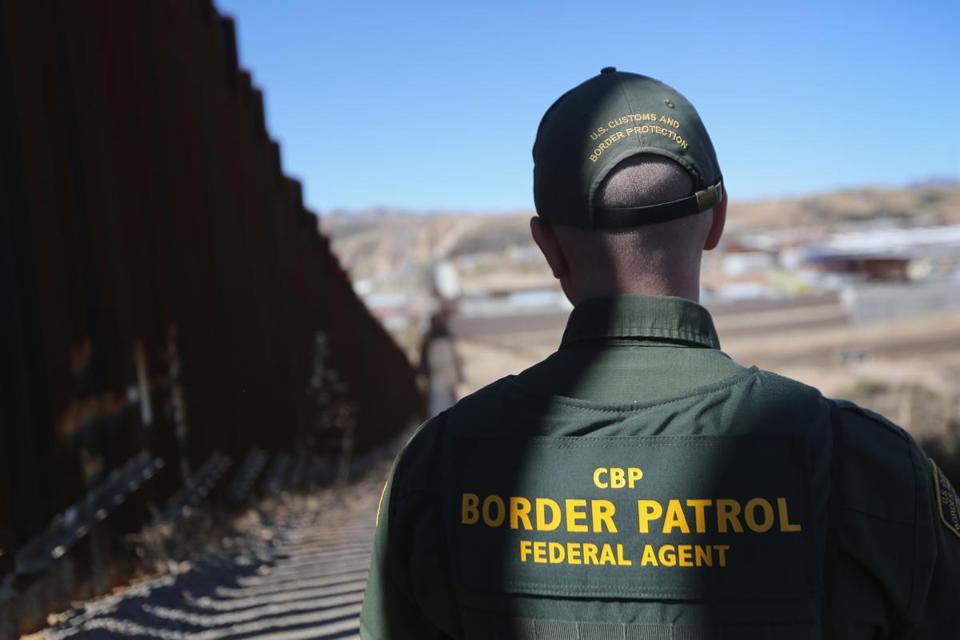 During the early morning hours of February 26, the Tactical Communications Center of the Swanton Border Sector received a report that a sedan had crossed the international border by driving across the lawn of the Haskell Free Library in Derby Line, Vermont. The Haskell Free Library was deliberately built on the border of Canada and the United States in 1904.

The vehicle traveled east on Caswell Avenue past an agent in his marked Border Patrol vehicle and drove onto the on-ramp onto the southbound lanes of Interstate 91. The agent followed the vehicle and performed a vehicle stop, where he saw that the vehicle contained three adults and two children. During questioning, the three adults in the vehicle admitted that they were citizens of Romania and that they did not possess any immigration documentation allowing them to enter or remain in the United States.

Agents arrested the three adults and transported the vehicle occupants to the Newport Border Patrol Station for records checks and processing. Birth certificates found during a search indicated that two of the adults were the parents of the children. The search also revealed that all five had recently legally entered Canada, under Canada’s visa waiver program. Romanians are exempt from obtaining a visa prior to entering Canada.

Agents fined the driver $5,000 for illegally entering the United States in a vehicle at a place not designated as a border crossing point in violation of 19 USC 1433. After processing, agents turned over all five illegal aliens over to U.S. Immigration and Customs Enforcement (ICE) Office of Enforcement and Removal Operations (ERO) for removal proceedings.

“This arrest is a great example of the vigilance our Border Patrol agents display on a daily basis,” said Newport Station Patrol Agent in Charge Richard Ross. “I’m proud of the work that agents perform every day to keep our border secure and our country safe.”

The Swanton Sector is responsible for securing the land border between ports of entry in Vermont, New Hampshire and northeastern New York.

Nogales Border Patrol agents at the Interstate 19 immigration checkpoint arrested an eighteen-year-old U.S. citizen from Nogales, Arizona, after finding more than 59 pounds of methamphetamine concealed in his vehicle.

Agents referred the teen, driving a Nissan Altima for a secondary inspection after a Border Patrol canine alerted to an odor it was trained to detect. Inside the vehicle, agents found fifty packages of methamphetamine valued in excess of $150,000.

Agents arrested the teen for narcotics smuggling and seized the drugs and vehicle; which were then turned over to the Drug Enforcement Administration.

A Border Patrol agent assisted an Arizona Department of Public Safety trooper with a traffic stop near the intersection of State Route 80 and State Route 90. As the trooper attempted to stop a Ford F-250, the driver fled while a male passenger jumped out of the moving vehicle. During the pursuit, the driver drove through a barbed wire fence and continued to flee off-road. The assisting agent followed the truck’s trail and soon found it abandoned near a residential area. At that point, the Border Patrol agent used his canine partner and found multiple bricks of marijuana in the truck weighing a combined 156 pounds and worth an estimated $78,000.

After additional agents arrived to secure the drugs, the agent used his canine partner to track and apprehend the driver, later identified as a 20-year-old U.S. citizen.

Other Border Patrol agents tracked and apprehended the passenger, identified as a 42-year-old U.S. citizen, found a short distance off the highway.

Agents turned the two men, vehicle and marijuana over to Homeland Security Investigations for processing.

An agent working the primary inspection lane directed a 60-year-old Bisbee man for a secondary inspection of his Buick sedan. During the inspection, a canine alerted to an odor it was trained to detect coming from the vehicle’s trunk. Agents discovered a Peruvian female and Mexican man hiding inside. Agents arrested the driver with the two illegal aliens and seized the vehicle.

Both illegal aliens, ages 27 and 39, were transported to the Willcox Station for processing of immigration violations. The driver faces human smuggling charges and will remain in custody pending disposition.

After agents referred the twenty-two-year-old male driver of a Nissan Sentra for a secondary inspection of the vehicle, a Border Patrol canine alerted to an odor it was trained to detect from vehicle. Agents assessed the spare tire of the vehicle and discovered methamphetamine, worth in excess of $22,400.

Agents arrested the driver and his twenty-four-year-old female passenger for narcotics smuggling and seized the drugs and vehicle. The child was released to a family member.

The case was turned over to Homeland Security Investigations.