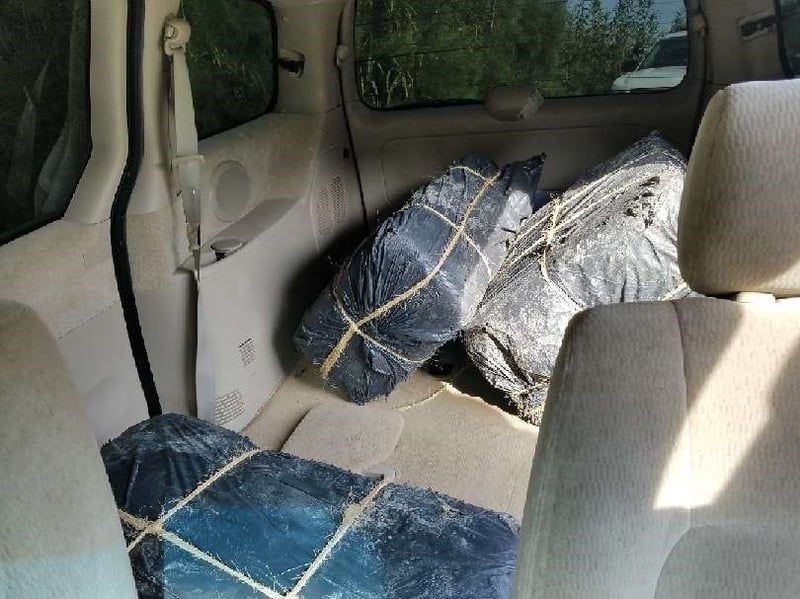 On April 20, 2018, Border Patrol agents seized 294 pounds of marijuana at the Border Patrol Checkpoint on Interstate Highway 35, north of Laredo, Texas. Agents encountered a Dodge Ram truck at the primary inspection lane and referred the driver to secondary after a Border Patrol canine alerted to the presence of concealed humans and/or narcotics. A search of the vehicle resulted in the seizure of 22 bundles of marijuana. The marijuana was estimated to have a value of $235,277.52. The driver, a United States Citizen, was arrested. The driver, vehicle and narcotics were turned over to the Drug Enforcement Administration. 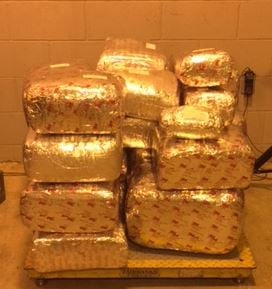 The second event took place later that same day when Border Patrol Agents seized 218 pounds of marijuana after responding to suspicious activity near Riverside Drive in Laredo, Texas. Agents discovered an abandoned Kia mini-van with three bundles of marijuana inside. The marijuana had an estimated value of $174,400.00. No arrests were made in this case. The marijuana was turned over to the Drug Enforcement Administration and the vehicle was seized by Border Patrol.

Border Patrol agents continue disrupting the flow of drugs into the United States resulting in the seizure of over $3.1 million dollars in narcotics in two separate events.

On April 18, 2018, Border Patrol agents seized 2.46 pounds of methamphetamine and 2.35 pounds of cocaine at the Border Patrol Checkpoint on Interstate Highway 35, north of Laredo, Texas.  Agents arrested two United States Citizen’s traveling on a Greyhound bus after discovering a bundle of cocaine underneath a seat and identifying another subject with a bundle of methamphetamine taped to his back.  The methamphetamine was estimated to have a value of $81,552.00 and the cocaine was valued at $76,614.00.  Both subjects and narcotics were turned over to the Drug Enforcement Administration.

On April 19, 2018, Border Patrol agents seized 91.96 pounds of liquid methamphetamine at the Border Patrol Checkpoint on Interstate Highway 35, north of Laredo, Texas.  Agents encountered a black Pontiac vehicle at the primary inspection lane and referred the vehicle to secondary after a Border Patrol canine alerted for the presence of narcotics and/or concealed humans. A further search of the vehicle resulted in the seizure of several bottles and plastic bags containing liquid methamphetamine.  The methamphetamine was estimated to have a value of $2,944,000.00.  The driver, a Mexican National, was arrested.  The driver, narcotics and vehicle were turned over to the Drug Enforcement Administration.

“The vigilance of the men and women of the United States Border Patrol in disrupting the flow of narcotics attests to our commitment in keeping America and its communities safe,” said Assistant Chief Patrol Agent Gabriel H. Acosta.

On April 19, 2018, Border Patrol Agents along with the Laredo Police Department responded to a request for assistance from Homeland Security Investigations regarding suspicious activity at a residence on San Luis Street in south Laredo, Texas.  A total of 56 illegal aliens which included men, women and children were found inside the residence.  The subjects were determined to be from the countries of Guatemala, Mexico, and Honduras.  All subjects were processed accordingly. Homeland Security Investigations (HSI) has the lead in the investigation.

“The partnerships in Laredo between the United States Border Patrol, Homeland Security Investigations and the Laredo Police Department continue to show results in disrupting criminal organizations from operating in South Texas.  We will continue to work with our law enforcement partners to prosecute those responsible and prevent individuals from being subjected to deplorable conditions,” said Laredo Sector Assistant Chief Patrol Agent Gabriel Acosta.

CBP Officers Seized More Than $1.2 Million in Methamphetamine at the Del Rio Port of Entry

U.S. Customs and Border Protection (CBP) officers recently seized a significant amount of alleged crystal methamphetamine with an estimated street value of more than $1.2 million in a single enforcement action at the Del Rio Port of Entry.

“This significant interception of hard narcotics is a testament to the vigilance and diligence that is instilled in our CBP officers in securing our borders,” said Port Director Mucia C. Dovalina, Del Rio Port of Entry. “They remain ready in protecting our country and keeping dangerous drugs from reaching our communities.”

On Wednesday, April 18, CBP officers at the Del Rio International Bridge seized approximately 86 pounds of alleged methamphetamine in 24 packages concealed within the tires of a 2006 Ford Expedition, driven by a 24-year-old female U.S. citizen.

CBP officers conducted a thorough secondary examination, utilizing a canine unit to assist in finding the hidden narcotics. The seized narcotics have an estimated street value of $1,200,625.

CBP officers arrested the driver, seized the narcotics and the vehicle. The case was turned over to U.S. Immigration and Customs Enforcement-Homeland Security Investigations (ICE-HSI) special agents for further investigation.