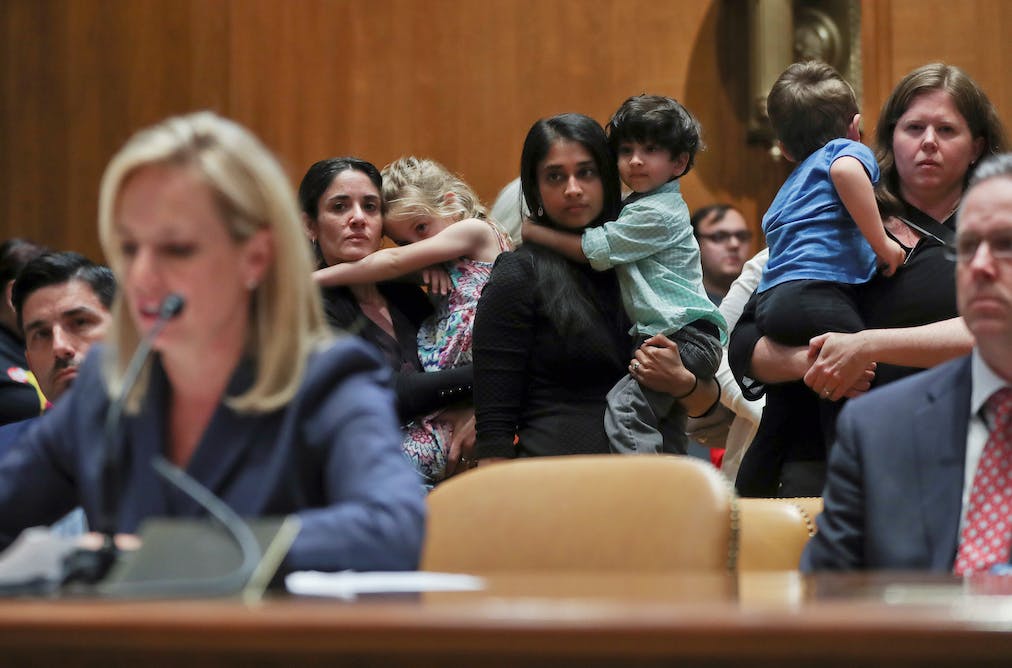 A recent poll shows that two-thirds of Americans oppose the Trump administration’s policy of separating immigrant families apprehended along the U.S.-Mexico border.

Amid a firestorm of criticism, President Donald Trump has blamed Democrats and inaction in Congress for the family separation policy.

Only Congress can provide the comprehensive immigration reform that would address the fundamental problems plaguing the American immigration system, including the statuses of undocumented immigrants already living in the U.S.

However, current immigration laws give the executive branch considerable discretion in deciding which immigrants to detain and release from custody.

Trump has at his disposal a variety of alternatives – other than separating families – that would promote his stated goal of deterring migration from Central America. Those alternatives could avoid violating international human rights norms.

Immigrant detention by past administrations

Many presidents have used the detention of migrants as a tool to enforce immigration law. At the same time, the courts have rejected heavy-handed attempts to deter migration that infringe on the rights of noncitizens.

For example, in Orantes-Hernandez v. Thornburgh, a court of appeals in 1990 found mass immigrant detention and various related policies by the Reagan and first Bush administrations to be unlawful. The policies included detaining immigrants in remote locations where it was difficult for them to retain legal counsel. Together, they formed a concerted effort to deter Central Americans from pursuing asylum claims.

Similarly, in 2014, the Obama administration’s mass detention of Central Americans brought many – and many successful – lawsuits. In Flores v. Lynch in 2016, the court of appeals found that a settlement agreement in a lawsuit required the release of detained children.

Under Trump’s administration, the policy of separating families in order to detain adults has struck a nerve and generated an unprecedented political outcry. Several lawsuits have been filed seeking to end the policy of family separation, including one filed by the American Civil Liberties Union in federal court in San Diego.

The courts have played major roles in moderating the Trump administration’s immigration policies. For example, they’ve issued rulings to block Trump’s “Muslim” or “travel ban” and his attempt to cut federal funding to “sanctuary” cities that refuse to fully cooperate with federal immigration enforcement efforts.

Although it ultimately may take a court ruling to stop family separations, it doesn’t have to be this way. President Trump has many other policy options available to him that he can implement without any Congressional action.

In 2014, the Obama administration faced a large number of Central American migrants crossing the border without inspection. Reports at that time suggest it was a much larger influx than what Trump is facing today.

With increasing numbers of families being apprehended by immigration agents at the border, the Obama administration began using what’s called “family detention.” Entire families were detained together in one facility.

Family detention centers operated in Pennsylvania, Texas and, for a time, New Mexico. Although critics argued that family detention was also inhumane, it certainly did not generate the same level of outrage at Trump’s policy of family separation.

Currently, migrants apprehended at the border are placed in detention; migrant families are separated. Detention under the Trump administration’s “zero tolerance” policy is mandatory, without the possibility of being released on bond.

Prior to this policy, when someone was detained by U.S. immigration authorities, they were allowed a hearing and the opportunity to post a bond for release. Rather than remaining detained, they were released into the community until a hearing was scheduled to evaluate their asylum or other claim.

This is the norm for anyone held in detention in the United States. In fact, the Supreme Court has held that this is a constitutional requirement.

President Trump and Attorney General Jeff Sessions have both denigrated the ordinary approach to posting bonds when it comes to dealing with noncitizens who cross the border without documentation, even if they have a bona fide claim to asylum. Trump signed a memo to end the release of immigrants into the community in April.

Some critics argue that those who are released fail to appear in court when the time comes. However, data show that the vast majority of families who are apprehended and bond out of custody subsequently appear at their removal hearings.

The Trump administration could allow bond hearings for immigrant families and release them if they are not a flight risk or danger to the community. Children could be bonded out with their families and families would remain together. Devices like ankle bracelets could be used to help ensure court appearances.

Previous administrations have responded to similar situations at the U.S.-Mexico border, but none have resorted to the separation of families as a device to deter migration from Central America. The president has said that Congress should fix it. But the president has the power to do that himself.

Kevin Johnson, Dean and Professor of Public Interest Law and Chicana/o Studies, University of California, Davis. This article was originally published on The Conversation.

Could This Material Enable Autonomous Vehicles to Come to Market Sooner?