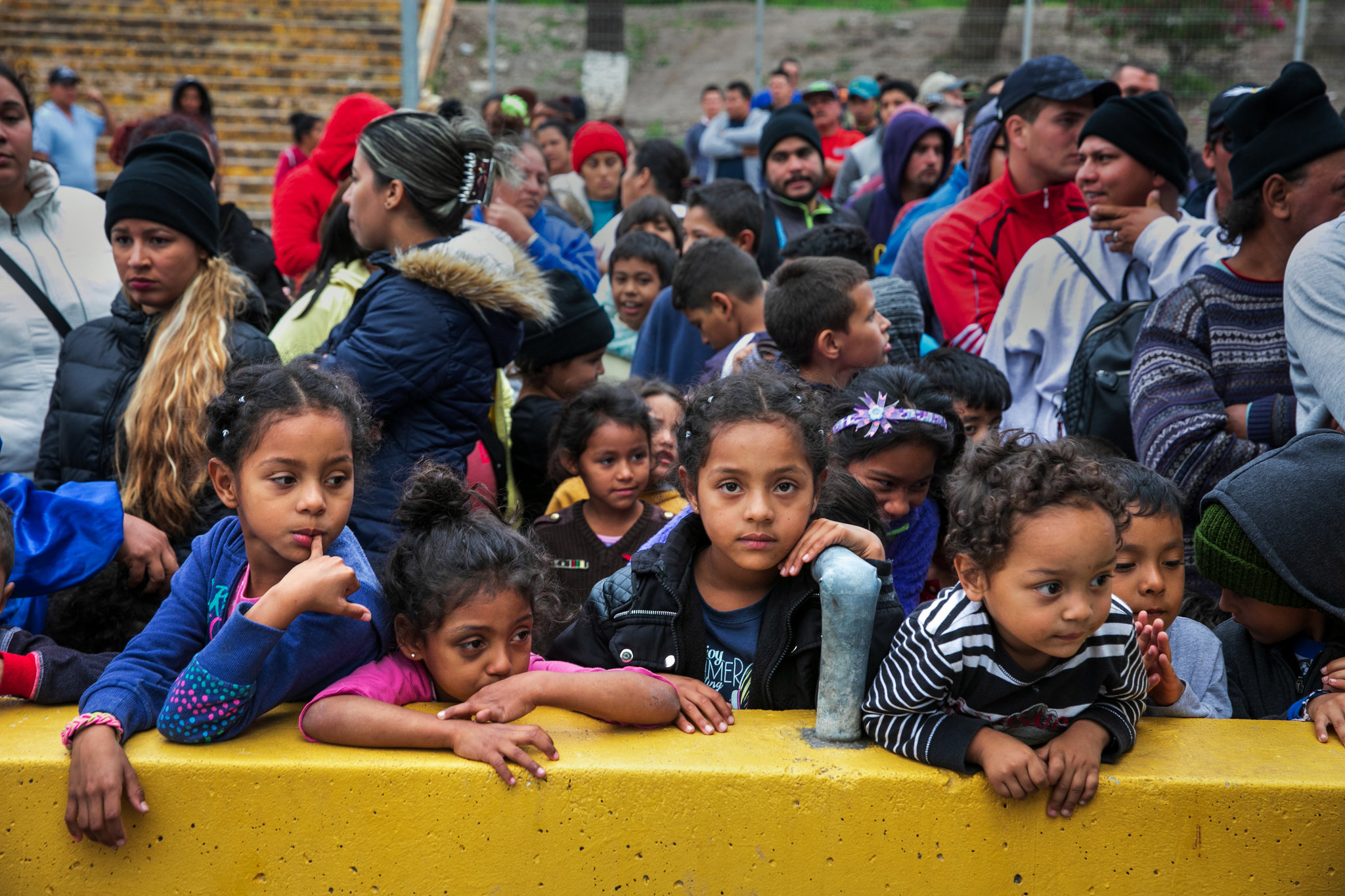 Immigration has always been a force of change in U.S. public education. Each generation of young newcomers prompts state and school district leaders to prepare and adapt. Will the newcomers choose to live in our state or district? How many will register for school? Do schools have the capacity and training to support these students? What are school districts doing that can guide other school districts’ response?

These questions are relevant now more than ever. In recent years, record numbers of undocumented and asylum-seeking families and children from Mexico and Northern Triangle countries—El Salvador, Guatemala, and Honduras—crossed the U.S. southwest border in search of safety and opportunity. Some cross undetected, without registering with immigration authorities and becoming “undocumented.” Others apply for asylum at the border. Once inside the United States, all children, regardless of immigration status, have the right to a public K–12 education by federal law. Education leaders need unbiased information, data, and good practices so they can be ready to support the newcomers effectively once they enroll in school.

RAND Corporation researchers sought to understand how the current increase in undocumented and asylum-seeking children may affect the K–12 school system in the coming years. To do this, the research team collected and analyzed a rich mix of quantitative and qualitative data and methods. The team is the first to model how many school-age children there are in specific states around the country, as well as implications for the numbers of teachers and school staff. The team reviewed federal and state policies for the education of undocumented and asylum-seeking children and conducted case studies of a school district in California and a school district in Louisiana. The findings can help state and local education officials, school districts, and school leaders address ongoing concerns and better prepare to assist this population in the coming years.

How Many Undocumented and Asylum-Seeking Children Are Now in School?

In the study, undocumented immigrant and asylum-seeking children refers to children who arrived in the United States either undetected as they crossed the border or who have applied for asylum, including those who arrived unaccompanied and those who arrived as part of a family group. Figure 1 presents the research team’s estimates as to how many children crossed the border between FYs 2017 and 2019, how many had unresolved immigration status in 2020, and how many of those children were school-age and entered public schools. Most children arriving in family units (77 percent) were age 12 or younger, while most unaccompanied children (74 percent) were teenagers.

Since FY 2019, the last year of arrivals considered in the study, the COVID-19 pandemic has resulted in substantial impacts on both the flow of children to the southwest border and U.S. policy toward these children. Border encounters with children and family units fell quickly at the outset of the pandemic in 2020 and then rebounded in early 2021.

Which States Did Most Undocumented and Asylum-Seeking Children Move To?

Figure 2.Estimated Distribution Across States of Recently Arrived Undocumented and Asylum-Seeking Children from Mexico and the Northern Triangle in Primary- and Secondary-School Systems, as of March 2020

As with every wave of immigrants, some states and counties experienced more arrivals than others. Analyses of multiple data sources shows that 75 percent of the wave of newcomers from FY 2017 through FY 2019 have settled in California, Texas, Florida, New York, Virginia, Maryland, New Jersey, Georgia, North Carolina, and Louisiana.

As illustrated in Figure 2, California, Florida, Texas, and New York each have more than 20,000 of these children enrolled in school. More than 10,000 are in school in five East Coast states—Georgia, Maryland, New Jersey, North Carolina, and Virginia. All nine states plus Louisiana (which has 9,200) account for about 75 percent of recent arrivals. Los Angeles, California, and Harris County, Texas (which includes Houston), are the counties with the largest numbers, with more than 50,000 children (more than 15 percent of all such children) between them. Estimates generated by the distribution of these children across states, as shown in Figure 2, suggest that the seven states with the highest population of newcomer students would each have needed to hire at least 1,000 additional teachers and at least 1,000 additional staff to support the new arrivals without increasing student-teacher or student-staff ratios. Furthermore, schools in Los Angeles County, California, and Harris County, Texas (which includes Houston), alone would need at least an additional 1,000 teachers to maintain their baseline teacher-student ratios.

What Policies Guide and Support the Education of These Students?

Federal law guarantees minors’ right to an education, which was codified in the U.S. Bill of Rights and reaffirmed in Title VI of the Civil Rights Act of 1964. Supreme Court rulings have established that children have a right to education regardless of immigration status (Plyler v. Doe, 1982), set requirements regarding the provision of education while in federal custody (Reno v. Flores, 1993), and clarified constitutional educational practices for children with limited English proficiency (Lau v. Nichols, 1974).

Although the federal role in education has expanded since the mid-20th century, education remains primarily a state and local responsibility. State education agencies are responsible for administering federal and state education laws, dispersing federal and state financial resources, and providing guidance and support for local education agencies or school districts. The U.S. Department of Education provides two major resources to help states and school districts educate these students:

State policies related to immigration and education shape undocumented and asylum-seeking children’s access to public education, as well as the quality of that education, with variation from state to state in laws and circumstances. Factors that vary by state include policies for ages of students who can be enrolled; eligibility for public benefits, which can influence teenagers’ decisions to drop out of school and work; and eligibility for in-state college and university tuition and state financial aid. In addition, differences in policy and practice at the local level—such as varying requirements for proof of residency—contribute to differences in the educational experiences of these children, and front-line district staff in districts sometimes create administrative burdens for children and families through unwitting or willful complication of enrollment and ongoing administrative processes. According to the research team’s interviews with stakeholders in the education field, the chief impediments to accessing federal support were understanding of the law, navigation of the policy context, and receipt of adequate funding.

How Do Schools with Large Populations of These Students Educate and Support Them?

The research team conducted two school district case studies in two states with high numbers of immigrants who crossed the U.S. southwest border: Jefferson Parish Schools in Louisiana and Oakland Unified School District in California. The selected cases include one district that experienced large, recent increases in the population of children in this study (Jefferson Parish) and one that has been serving large numbers of these children for many years (Oakland Unified). Both are in the top ten states and top 40 districts nationally in terms of numbers of newcomer students. One is in a sanctuary state (i.e., a state whose laws limit the extent to which state and local law enforcement can collaborate with federal agencies on deportation) (California), and one is not (Louisiana).

Notably, the schools in the study faced staffing shortages, which were also reflected in the researchers’ analysis of the national data. The information the team gathered was from interviews and focus groups with central office staff, school principals, teachers, counselors, social workers, English-language specialists, and community groups. Table 2 summarizes the challenges and useful approaches that interviewees discussed most. 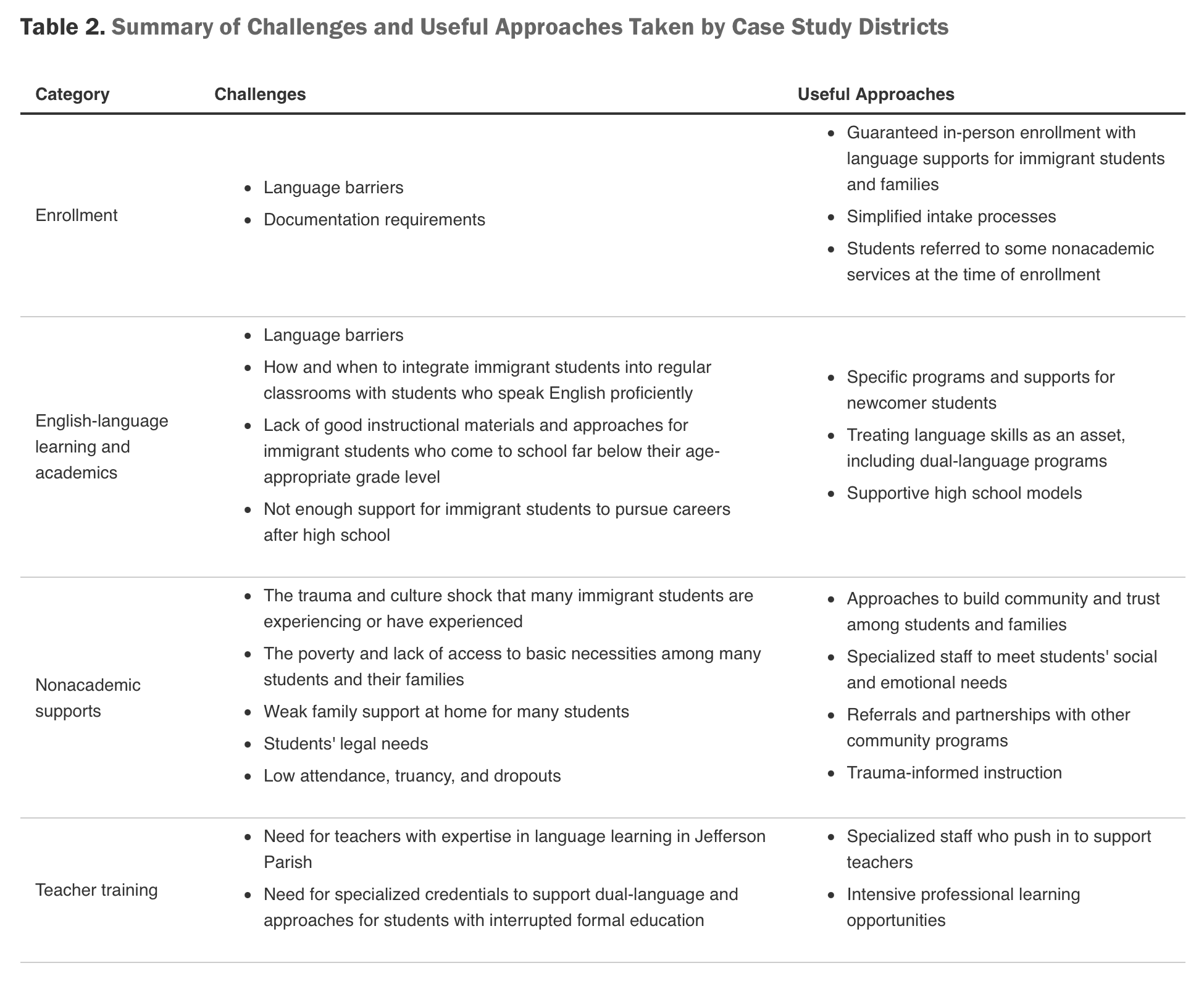 Districts and schools also face significant challenges. District leaders noted that documentation requirements, online enrollment, and language barriers could hinder these students’ access to school. Staff in both districts described the challenge of determining when to integrate newcomer English-language learners into regular classrooms with students who speak English proficiently. Another challenge facing staff was the lack of sufficient quality instructional materials and approaches for students who may come to school far below their age-appropriate grade level. Staff also reported challenges in helping students consider postsecondary education and career options. Both districts provide all English-language learners—and particularly those who may be undocumented or asylum-seeking—with numerous resources and supports and address the challenges described here through multiple approaches, shown in Table 2.

The growing numbers of undocumented and asylum-seeking children has increased pressure on public schools. As the case studies suggest, many districts are doing their best and, in some cases, are clearly doing well in providing these students with education and other support. This review of immigration trends and school-related statistics, relevant policies, and challenges that students, policymakers, and districts face elicited recommendations for federal and state policymakers and school district leaders to consider before and after these students enter school.

Addressing the Initial Needs of Children When They Cross the U.S. Border

Develop and improve definitions, data, and information sources. Data about the numbers, locations, and ages of undocumented and asylum-seeking children are not available to the extent needed to support national policymaking. There is also a need to improve mechanisms for tracking and analyzing the performance of these students without collecting sensitive information or endangering them and their families.

Create opportunities for collaboration and discussion among stakeholders. A review of the immigration process in the full report suggests that many asylum-seeking children fall through the cracks at the point when they are released from the Office of Refugee Resettlement to a sponsor. That office, along with other federal and state agencies, might consider collaborating more closely with community service providers and local departments of health, including those who might provide more social and medical services and legal supports than schools are able to provide.

Addressing Needs of Children When They Are in K–12 Schools

Provide additional funding for schools with immigration surges on a rolling basis. Influxes of immigrant students arrive at schools throughout the year, yet schools must request funding based on August student populations. Consider giving schools an option to request federal funding more frequently than annually, as populations change.

Strategically develop, recruit, and place professionals with relevant language and other needed skills in school districts.School districts are facing a shortage of education professionals who have the language skills and appropriate certifications to support newcomers. Offering additional training and creating provisions for emergency waivers or certification opportunities would expand the labor markets from which districts could recruit staff.

Develop more resources and opportunities for educator collaboration to support students with interrupted formal education. More collaboration among schools and educators, as well as repositories and one-stop shops for materials and training, would likely benefit both this student population and the schools that educate them. This should include readily available assessments in Spanish to help schools place incoming students in the appropriate grade.

Create more-targeted career and technical education approaches. A key challenge in both case study school districts was in preparing high school English-language learner students who were academically behind for the workforce after high school. The U.S. Department of Education and state education agencies should consider developing federal or state guidance regarding secondary training opportunities.

Improve the evidence base about critical underresearched areas. Educational approaches, cross-state comparisons, community relations, and teacher training as related to the education of undocumented and asylum-seeking children are all areas where the evidence base needs to be improved.