When an earthquake or other natural disaster strikes, government relief agencies, insurers and other responders converge to take stock of fatalities and injuries, and to assess the extent and cost of damage to public infrastructure and personal property.

But until now, such post-disaster assessment procedures have focused on the dollar value of damages to property while failing to account for something that is equally important but harder to quantify; namely, that the poorer someone or their family is, the harder it is for them to recover and regain their former standard of living.

Now, civil engineers at Stanford, working with economists from the World Bank, have devised the first disaster assessment model that combines the well-understood property damage estimates with a way to calculate two previously nebulous variables – the community-wide economic impacts caused by disruptions to industry and jobs, and the social costs to individuals and families.

Although such an analysis might seem obvious, no one had ever put brick-and-mortar losses together with pain and suffering consequences until the Stanford civil engineers teamed up with World Bank economists Stephane Hallegatte and Brian Walsh to create this holistic damage assessment model.

In a study published March 30 in Nature Sustainability, the researchers test their model using a hypothetical 7.2 magnitude earthquake on the Hayward fault near San Francisco. “We’ve developed a financial model that builds upon previous property damage procedures in a way that allows us to quantify the pain and suffering people feel after a quake depending on their socioeconomic status,” said study co-author Jack Baker, a professor of civil and environmental engineering at Stanford. 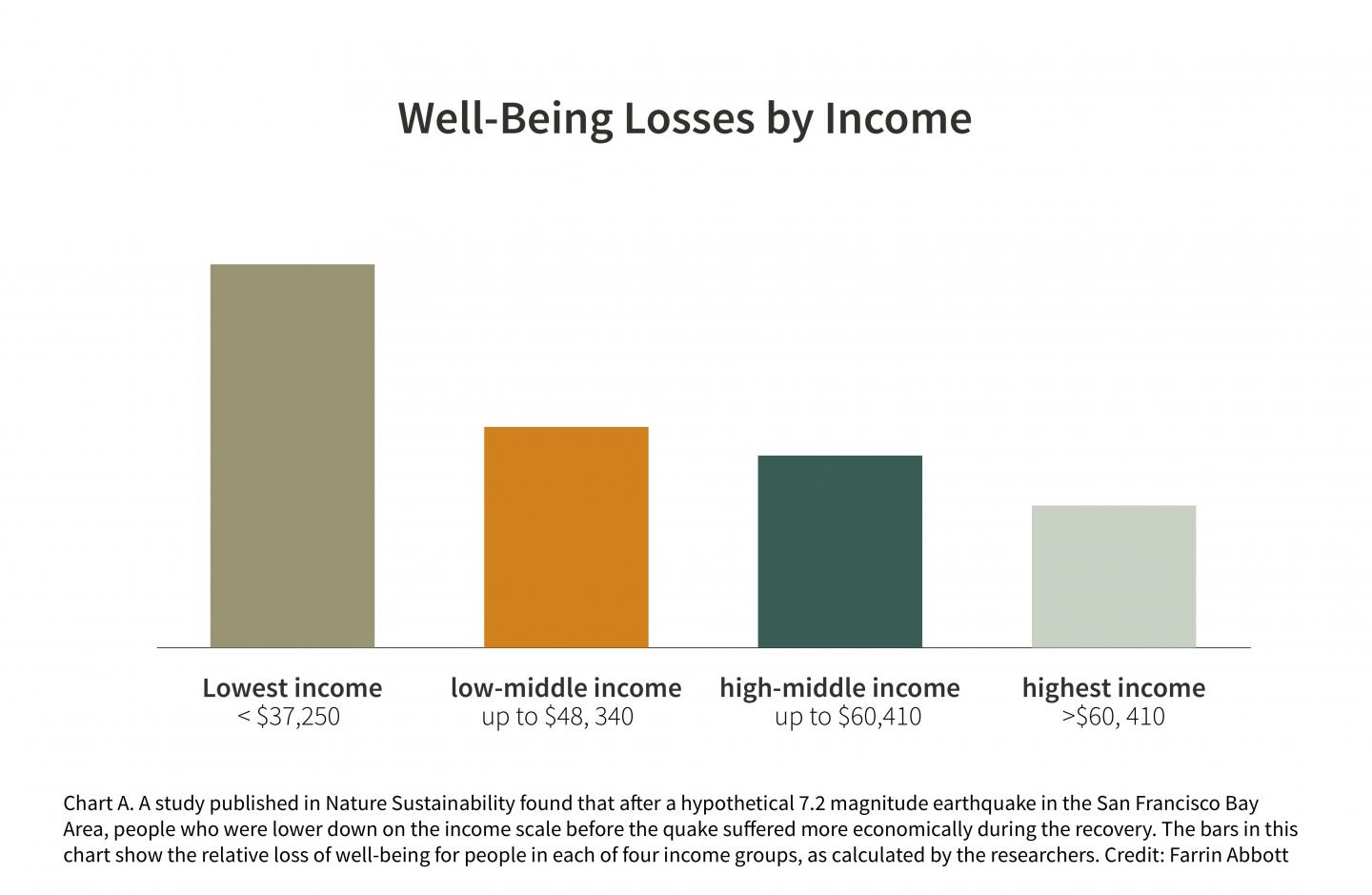 Although the researchers tailored their approach specifically for earthquakes, they hope experts in hurricanes, tornados, floods and other disasters will also adopt the new economic and sociological measures in order to give policymakers new tools to plan for disasters.

Study first author Maryia Markhvida, a former graduate student of Baker’s, said the researchers started with traditional models of property damage assessment, and added on top of these a second layer of analysis to quantify a concept called “well-being,” which they borrowed from economists and sociologists. The model calculates the incomes and consumption levels of people in different socioeconomic strata to assign a numerical value to well-being, which can be thought of as how people feel about daily life as they recover from a disaster.

The researchers combined the physical damage tools with economic and well-being assessments to create a more holistic model of disaster effects. For example, should the property damage part of their system show that a particular building is likely to collapse, the second layer of analysis would kick in to extrapolate how such structural damage would affect where people work and how it would affect a variety of industries in ways that would trickle down to impact people’s incomes and spending power, thus diminishing their sense of well-being.

Much of the income, expense and spending data for the analysis was derived from Census data, which enabled the researchers to tie their well-being calculations to the relative poverty or prosperity of people living in different neighborhoods. 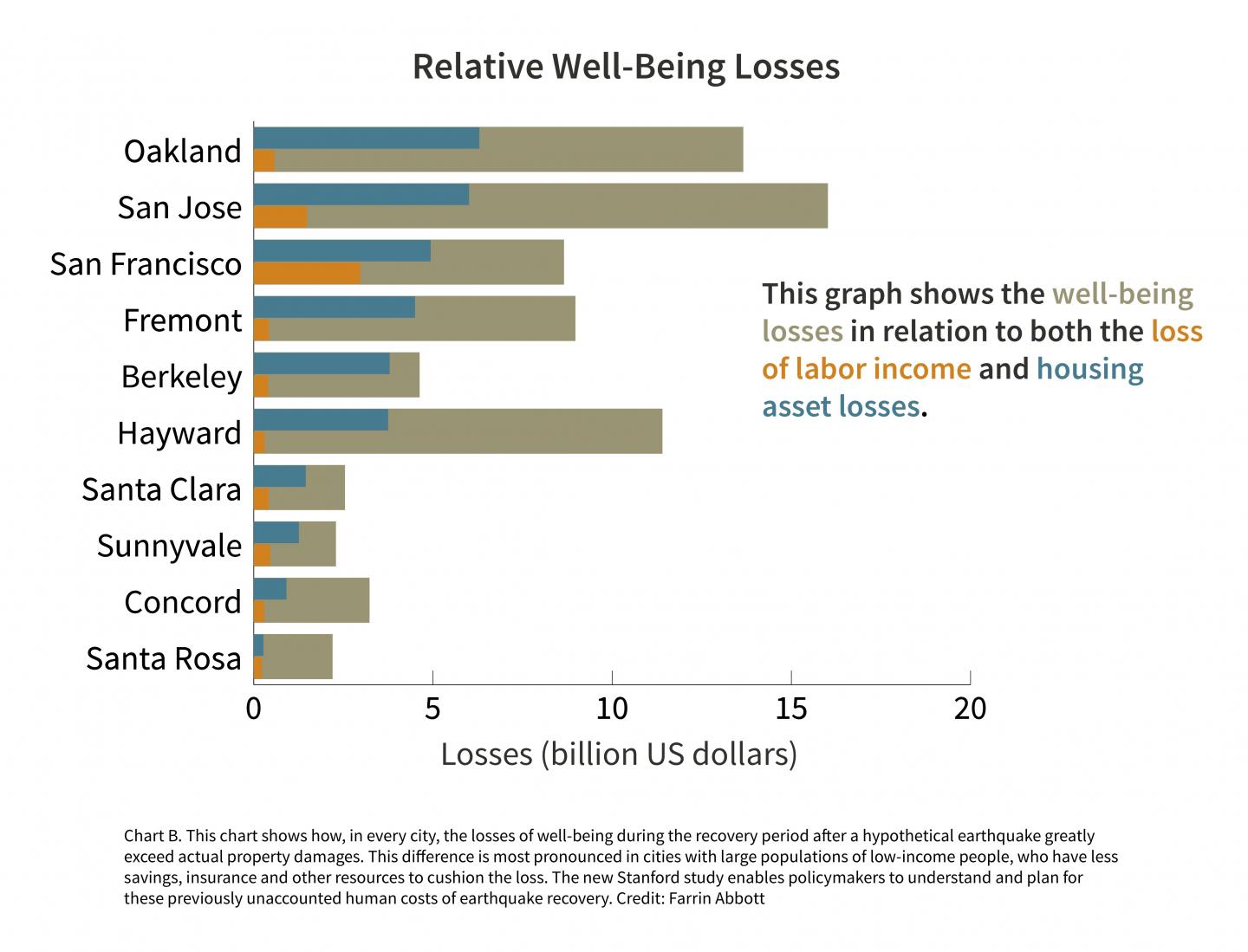 The researchers also compared three types of losses for 10 cities in the San Francisco Bay Area (see Chart B available via image download). These calculations factored in the vulnerability of each city’s building stock (the number and types of homes, offices and other structures), its proximity to the hypothesized earthquake and other factors such what sort of savings and insurance people had as safety cushions. The chart shows that, even when property damages are roughly equal, well-being losses are larger in cities that have lower-income population and lower household savings.

“It makes sense that the people who have less in the first place feel that life becomes that much harder when they lose some of what little they had,” Markhvida said.

The researchers envision that policymakers will use the model to consider in advance how to mitigate the impacts of a quake and speed the region’s recovery afterward. They might, for instance, run “what if” exercises to weigh the relative benefits of measures such as tightening building codes, providing incentives to do retrofits or get earthquake insurance, or make contingency plans to extend or expand unemployment benefits.

“This model could help government officials decide which policies provide the best bang for the buck, and also see how they might affect not just potential property damages, but losses to people’s sense of well-being,” Baker said.

Visitor's Garden Is Improving Prison Visitation Experience for All

Police Training Reduced Complaints and Use of Force Against Civilians