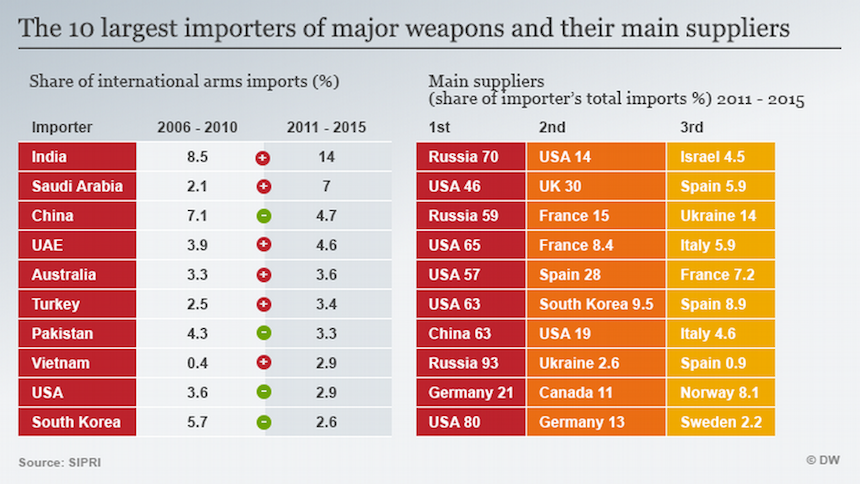 The flow of arms increased to Asia and Oceania and the Middle East between 2007–11 and 2012–16, while there was a decrease in the flow to Europe, the Americas and Africa. The five biggest exporters — the United States, Russia, China, France, and Germany — together accounted for 74 percent of the total volume of arms exports.

Asia: major increases for some states
SIPRI says that arms imports by states in Asia and Oceania increased by 7.7 percent between 2007–11 and 2012–16 and accounted for 43 percent of global imports in 2012–16.

India was the world’s largest importer of major arms in 2012–16, accounting for 13 percent of the global total. Between 2007–11 and 2012–16 it increased its arms imports by 43 percent. In 2012–16 India’s imports were far greater than those of its regional rivals China and Pakistan.

“With no regional arms control instruments in place, states in Asia continue to expand their arsenals,” said Siemon Wezeman, Senior Researcher with the SIPRI Arms and Military Expenditure Program. “While China is increasingly able to substitute arms imports with indigenous products, India remains dependent on weapons technology from many willing suppliers, including Russia, the USA, European states, Israel and South Korea.”

Saudi Arabia was the world’s second largest arms importer in 2012-16, with an increase of 212 percent compared with 2007–11. Arms imports by Qatar went up by 245 percent. Although at lower rates, the majority of other states in the region also increased arms imports. “Over the past five years, most states in the Middle East have turned primarily to the USA and Europe in their accelerated pursuit of advanced military capabilities,” said Pieter Wezeman, Senior Researcher with the SIPRI Arms and Military Expenditure Program. “Despite low oil prices, countries in the region continued to order more weapons in 2016, perceiving them as crucial tools for dealing with conflicts and regional tensions.”

“The United States supplies major arms to at least 100 countries around the world—significantly more than any other supplier state,” said Dr. Aude Fleurant, Director of the SIPRI Arms and Military Expenditure Program. “Both advanced strike aircraft with cruise missiles and other precision-guided munitions and the latest generation air and missile defense systems account for a significant share of U.S. arms exports.”

Russia accounted for a 23 percent share of global exports in the period 2012–16. 70 percent of its arms exports went to four countries: India, Vietnam, China, and Algeria.

China’s share of global arms exports rose from 3.8 to 6.2 percent between 2007–11 and 2012–16. It is now firmly a top-tier supplier, like France and Germany which accounted for 6 percent and 5.6 percent, respectively. The ongoing lower rate of French arms export deliveries may end soon because of a series of major contracts signed in the past five years. Despite a spike in arms exports in 2016, German arms exports—counted over a five-year period—decreased by 36 percent between 2007–11 and 2012–16.

Other notable developments
— Algeria was the largest arms importer in Africa with 46 percent of all imports to the region.

— The largest importers in sub-Saharan Africa—Nigeria, Sudan and Ethiopia—are all in conflict zones.

— Imports by states in Europe significantly decreased by 36 percent between 2007–11 and 2012–16. Initial deliveries to Europe of advanced combat aircraft as part of major contracts started in 2012–16 and further deliveries will drive import volumes up in the coming years.

Loss of Territory Contributes to Significant Drop in ISIS Funding

Risk of Ross River Virus Could Be Next Global Epidemic