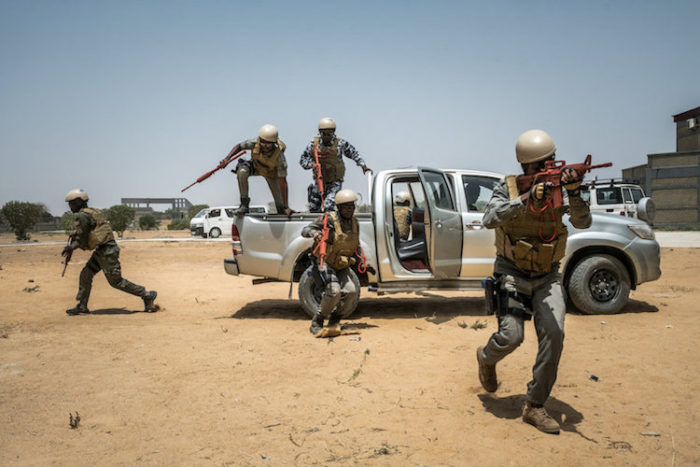 Brig. Gen. Zakaria Ngobongue, a senior Chadian officer who led 2,000 African and Western troops and trainers in a major counterterrorism exercise in the Chadian capital last month, warns that “Libya is descending into chaos. It’s a powder keg,” he said.

The New York Times reports that “Libya remains a violent and divided nation rife with independent militias, flooded with arms and lacking legitimate governance and political unity.” Since the 2011 uprising, Tripoli is controlled by a patchwork of armed groups that have built local fiefs and vied for power. Running gun fights have taken over the capital city in recent days.

General Thomas D. Waldhauser, head of the Pentagon’s Africa Command, told the Senate panel this month that “the instability in Libya and North Africa may be the most significant near-term threat to U.S. and allies’ interests on the continent. Even with the success of Surt, ISIS-Libya remains a regional threat with intent to target U.S. persons and interests.”

“The multiple militias and fractured relationship between factions in east and west Libya exacerbate the security situation, spilling into Tunisia and Egypt and the broader Maghreb, allowing the movement of foreign fighters, enabling the flow of migrants out of Libya to Europe and elsewhere,” Waldhauser added.

Western and African counterterrorism officials have also hinted that though the twin blows conducted by the U.S. B-52 bombers in January, killing eighty militants, weakened the Islamic State in Libya – once feared as the most deadly branch outside Iraq and Syria – the turmoil and political vacuum in the country are giving  the leadership of ISIS an opportunity to regroup. In an interview, Brig. Gen. Donald C. Bolduc, who oversees American Special Operations forces in Africa, said the Islamic State in Libya is “looking to work gaps and seams, and doing it all over again to gain a foothold, influencing the populace.”

Libya’s neighbors are quickly securing their borders against likely infiltration by fleeing ISIS fighters seeking refuge or recruitment of fighters. Algeria has announced the opening of a new air base in its far south borders with Mali, Niger, and Libya. Tunisia has built a 200 kilometer barrier to block about half of its border with Libya in order to ward off the militants. In January, Chad shut its borders with Libya for the same reason. But one main border crossing was reopened this month to allow Chadian citizens to return home from Libya and to reduce the scarcity of commercial traffic affecting the border towns.

Since summer 2016, the U.S. has been flying unarmed surveillance drone missions over Libya from bases in Tunisia as part of an important expansion of Tunisia’s counterterrorism cooperation with the Pentagon. Next year, the United States will complete the building of a $50 million drone base in Agadez, Niger. The base will allow Reaper surveillance drones to fly from hundreds of miles closer to southern Libya, to monitor southward movement of Islamic State fighters and other extremists migrating northward from the Sahel region. President Idriss Déby of Chad, at a regional security conference in Bamako, Mali, said “as long as the Libyan chaos lasts, security in the Sahel and the Sahara will always be strained.”

“ISIS in Libya is down but not out, and in the meantime, all of Libya’s other problems remain, which ensures that ISIS or something a lot like it will have little problem reasserting itself when the time is right,” said Michael R. Shurkin, a senior political scientist at RAND Corporation and a former C.I.A. analyst.

Terrorism in Westminster: London Had Expected Attack for Some Time and Police Reaction Was Rapid