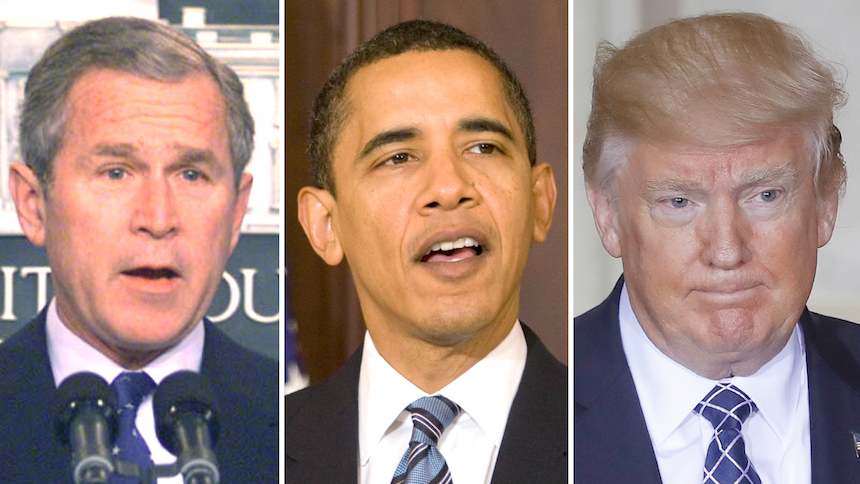 Thanks to the military interventions by the George W. Bush and Barack Obama administrations, the former presidents have effectively expanded executive authority for Donald Trump to go to war, a study from the University of Waterloo has found.

The study of U.S. military interventions between 2001 and 2016 found considerable similarities in the way Bush and Obama navigated around consultation and authorization protocols with Congress and the United Nations Security Council (UNSC).

This set a precedent that presidents could unilaterally go to war as opposed to seeking authorization from Congress, as was the practice in previous administrations.

“Right now, Donald Trump has an enormous amount of power to launch military action, perhaps more than any president since the Vietnam War,” says Aaron Ettinger, an assistant professor of political science at Waterloo. “Trump’s predecessors left a legacy of military adventurism that suits his aggressive style.”

U Waterloo notes that for his study, Ettinger researched official U.S government documents and surveyed the vast literature on post-9/11 U.S. foreign policy.

The erosion of legal and institutional constraints on the president going to war didn’t happen overnight, according to the study. Since 9/11, Bush and Obama both worked around domestic and international law in ways that tried to balance U.S. independence with respect for international order.

The study also found that while both Bush and Obama appealed to Congress for authorizations for the use of military force, it was Obama who proved more willing to proceed without it and by the end of his presidency, American forces were deployed and equipped for combat across North and East Africa, the Middle East, and Central Asia.

“Obama scrupulously resisted large or ground-based military actions, but his willingness to move forward militarily without Congressional agreement represents a remarkable expansion of executive authority,” said Ettinger. “The precedents set by both Bush and Obama take on added significance, given the inconsistencies in the new administration and instabilities internationally

“Trump’s first six months as president have seen tensions rise on the Korean peninsula, ongoing depravity in Syria and Iraq, the devolution of relations with Russia, strains with China, and the alienation of NATO allies,” Ettinger said. “We will soon see how a president with no foreign affairs experience, an aggressive personality and few restraints will respond to the current global climate.”

U.S. Advanced Nuclear Program Unlikely to Deliver on Its Mission