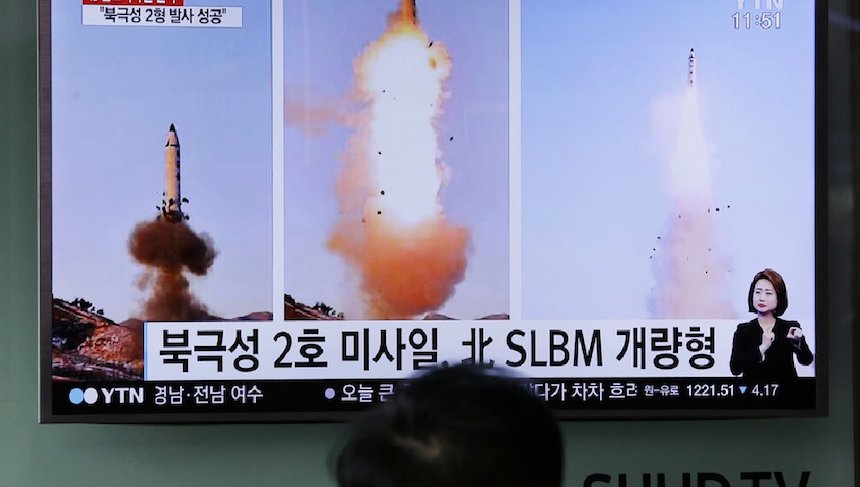 North Korea’s relentless march toward acquiring the capability to place a hydrogen bomb on top of an ICBM will soon pose a threat to all major U.S. cities.

There is another threat that marrying of a hydrogen bomb to a powerful rocket poses: An EMP threat. The North Koreans could launch a missile into the upper atmosphere, then detonate a high-yield hydrogen bomb in space in order to generate an electromagnetic pulse, or EMP, which would shut down the U.S.power grid and damage electrical devices.

The Daily Mail reports that North Korea’s state news agency specifically referred to an EMP tactic in an official press release. A news announcer of North Korean TV read the release, which said that the bomb North Korea tested on Sunday “is a multifunctional thermonuclear nuke with great destructive power which can be detonated even at high altitudes for super-powerful EMP attack.”

The idea of an EMP attack is not new, and in the early phase of the cold war it was openly discussed as one option a nuclear-power state could choose in order to cripple a rival nation. The purpose of an EMP attack is to overwhelm the electric grid, inflicting damage that could last weeks or even moths. Emergency equipment at hospitals would be useless, food refrigeration would not be available, traffic lights would stop working, water purification and sewage treatment facilities would stop functioning, flood gates on dams could not be opened or shut, buildings without independent generators would be without power, and much more.

The Boston Herald notes that in 2008, a report commissioned by Congress warned that an EMP attack could bring “widespread and long lasting disruption and damage to the critical infrastructures that underpin the fabric of U.S. society.”

EMPs also occur naturally on the sun, and can disrupt electrical system on earth. A 1989 blackout in Quebec was the result of a powerful explosions on the sun which expelled a cloud of charged particles that struck earth’s magnetic field.

Many scientists acknowledge that an EMP attack is theoretically possible, but they say the threat is exaggerated because it would be difficult for any rival nation, such as North Korea, calibrate any such attack with sufficient precision to cause maximum damage to the U.S. electrical grid. Unless a North Korean bomb exploded at the precise location and altitude – and such location and altitude are still theoretical constructs, because no EMP attack has ever been executed – the explosion might not do much damage.

Those who argue that the threat of an EMP attack is more acute note that today’s gird and electrical devices are much more susceptible to EMP disruption than what was the case in the 1960s.

Skeptics also question whether it would make sense for North Korea, if it wanted to inflict heavy destruction on the United States, to forego a traditional nuclear attack directed at a large city in favor of an untested concept such as an EMP.

Physicist Yousaf Butt wrote in a 2010 analysis a rogue state would prefer a “spectacular and direct ground burst in preference to a unreliable and uncertain EMP strike. A weapon of mass destruction is preferable to a weapon of mass disruption.”

Ballistic missile defense may be one answer to the threat of an EMPattack, because such a defense, if effective, would destroy the missile carrying the bomb before it reaches the right altitude and location.

Other experts say that the threat of EMP could be reduced considerably by designing electrical-grid components to withstand sudden pulses, just as the grid already is protected against lightning strikes. In addition, building backup and redundant systems to step in would be of great help in the event of electrical grids disruption.

How EMP works
Iain Thomson explains in the Register how an EMP is generated:

When a nuclear weapon is detonated, it generates not only a massive ball of fire, but also three distinct levels of electromagnetic pulse.

1. As gamma rays erupt from the exploding bomb, they generate a “fast pulse” EMP, or E1, as they strike air molecules. This peaks at tens of kilovolts per meter in a few nanoseconds, lasts for a few hundred nanoseconds in total, and can induce thousands of amperes in electrical systems.

2. From around one microsecond to one second after the explosion, the interaction of gamma rays also generates E2 EMP. This is less of an issue, but coupled with the E1 pulse could cause electrical damage.

3. It is the E3 “slow pulse” that is a massive problem for industries like power generation and telecommunications, the facilities of which happen to be located below or near the blast. It is caused by the effect of the explosion on the planet’s magnetic field and can last hundreds of seconds. Its effect on electrical systems using long cables is immense, generating hundreds to thousands of amperes in conducting lines.

Physicists knew about the electromagnetic pulse (some scientists call it “radioflash”) generated by a nuclear explosion even before the first atomic test in 1945. It was considered an annoying side effect that could easily be protected against.

Thomson notes that in the 1960s the United States and the Soviet Union began to consider using EMP for offensive purposes. In 1962 both countries began detonating atomic bombs in the upper atmosphere and recording the effects on the ground.

On 9 July 1962, the United States conducted the Starfish Prime test, detonating a 1.4 megaton bomb 250 miles up over Johnson Island in the Pacific. It caused electrical damage on Hawaii 1,400 miles away, crippled eight satellites, and killed three of them stone dead.

“While Hollywood fiction usually depicts the start of a nuclear war with masses of rockets firing off, in fact the first sign of war would probably be power failures and electronics dying,” Thomson writes. “Both sides had war plans that called for the first detonations to take place in the upper atmosphere, generating a massive EMP that would hopefully cripple the enemy and reduce their ability to retaliate and recover.”

Experts testifying before the Congressional EMP Commission said that in the event of a massive EMP attack on the United States using multiple high-yield warheads, around 90 percent of the American population would be dead after eighteen months due to famine, disease, and societal breakdown.