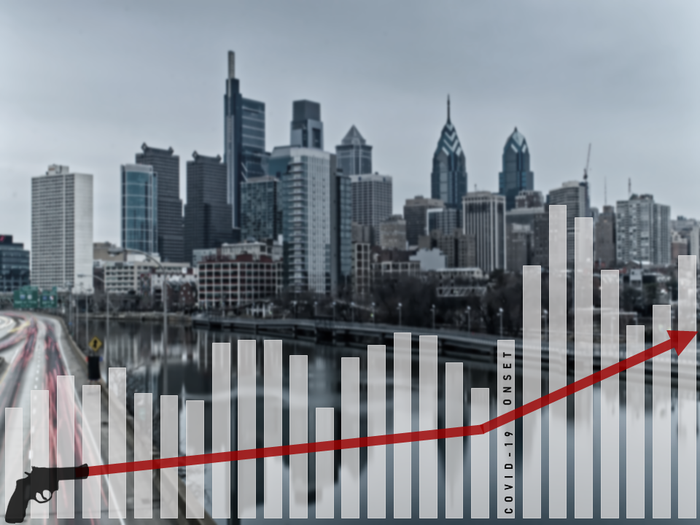 A new study highlights neighborhood-level gun violence dynamics in Philadelphia during the COVID-19 pandemic, identifying statistical links between changes in shooting rates and levels of drug market and police activity. Nicole Johnson and Caterina Roman of Temple University in Philadelphia, presented these findings in PLOS ONE on February 23, 2022.

Many prior studies have shown that homicide and gun violence increased in cities after the pandemic arose. However, different locations seem to have experienced varying relationships between the onset of the pandemic, including the timing of policies to mitigate spread of COVID-19, and rates of violence. Additionally, most studies have explored pandemic gun violence at a city-wide scale, without delving into individual neighborhoods.

To help clarify the dynamics of gun violence within cities, Johnson and Roman evaluated how shooting rates changed for different Philadelphia neighborhoods between January 2017 and June 2021—before and after the pandemic began. Using statistical models known as piecewise generalized linear mixed-effects models, they investigated whether these changes might be statistically linked to various neighborhood characteristics.

In addition, certain characteristics pertaining to the structure of a neighborhood—including its racial makeup and its proportion of people with low socioeconomic status—were linked to higher rates of shootings. However, those relationships remained stable during the pandemic.

The authors outline how their findings align with existing research on gun violence and suggest ways in which their study could help inform efforts to reduce shootings, both in general and in the wake of the pandemic. For instance, addressing violence associated with drug markets could help ease the increase in shootings seen after the onset of the pandemic.

Some scholars have suggested that increases in gun violence result from police backing off proactive policing in minority neighborhoods in the aftermath of events such as the death of George Floyd, but this study found that gun violence increased most in neighborhoods where police activity was highest. Future research could explore the finer-scale associations around such significant events.

The authors add: “Though our study calls attention to the overall risk of local and surrounding concentrated disadvantage on community rates of gun violence, these communities did not have increasing rates of gun violence as the pandemic unfurled. Instead, our findings illustrate the salience of drug market activity as a factor that contributed to increasingly more gun violence over the pandemic, and suggest there may be something particularly disorganizing about drug markets that make neighborhoods already at high-risk for firearm victimization even more vulnerable to the social and economic conditions introduced in 2020.”

What Is 3G and Why Is It Being Shut Down? An Electrical Engineer Explains