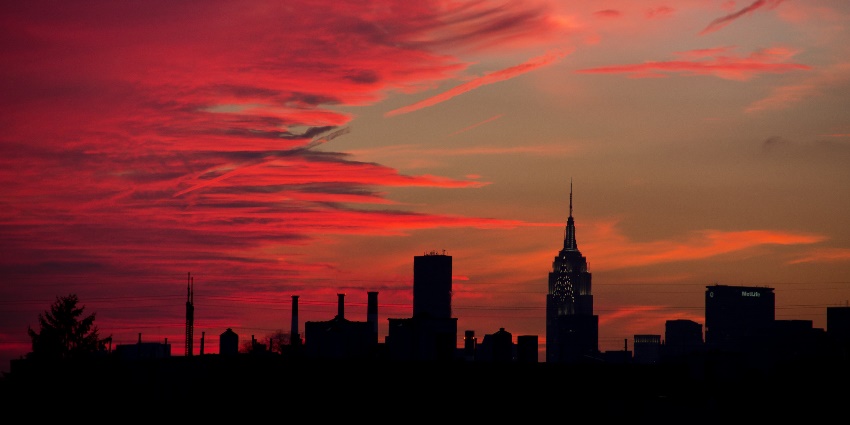 The amount of greenhouse gases in the atmosphere reached yet another new record high in 2014, continuing a relentless rise which is fueling climate change and will make the planet more dangerous and inhospitable for future generations, according to the World Meteorological Organization (WMO).

The World Meteorological Organization’s Greenhouse Gas Bulletin says that between 1990 and 2014 there was a 36 percent increase in radiative forcing — the warming effect on our climate — because of long-lived greenhouse gases such as carbon dioxide (CO2), methane (CH4), and nitrous oxide (N2O) from industrial, agricultural and domestic activities.

WMO reports that its study also highlights the interaction and amplification effect between rising levels of CO2  and water vapor, which is itself a major greenhouse gas, albeit short-lived. Warmer air holds more moisture and so increased surface temperatures caused by CO2 would lead to a rise in global water vapor levels, further adding to the enhanced greenhouse effect. Further increases in CO2 concentrations will lead to disproportionately high increases in thermal energy and warming from water vapor.

“Every year we report a new record in greenhouse gas concentrations,” saidWMO secretary-general Michel Jarraud. “Every year we say that time is running out. We have to act NOW to slash greenhouse gas emissions if we are to have a chance to keep the increase in temperatures to manageable levels.”

Atmospheric concentrations of CO2 — the most important long-lived greenhouse gas — reached 397.7 parts per million (ppm) in 2014. In the Northern hemisphere CO2 concentrations crossed the symbolically significant 400 ppm level in 2014 spring, when CO2 is most abundant. In spring 2015, the global average concentration of CO2 crossed the 400 ppm barrier.

“We will soon be living with globally averaged CO2 levels above 400 parts per million as a permanent reality,” Said Jarraud

“We can’t see CO2. It is an invisible threat, but a very real one. It means hotter global temperatures, more extreme weather events like heatwaves and floods, melting ice, rising sea levels and increased acidity of the oceans. This is happening now and we are moving into uncharted territory at a frightening speed,” he said.

“Excess energy trapped by CO2 and other greenhouse gases is heating up the Earth surface which leads to increase in atmospheric water vapor which in turn is generating/trapping even more heat,” said Jarraud.

“Carbon dioxide remains in the atmosphere for hundreds of years and in the ocean for even longer. Past, present and future emissions will have a cumulative impact on both global warming and ocean acidification. The laws of physics are non-negotiable,” Jarraud added.

The Greenhouse Gas Bulletin provides a scientific base for decision-making.WMO releases it ahead of the UN climate change negotiations in Paris, to be held from 30 November to 11 December. A separate Emissions Gap report, from the United Nations Environment Program, focuses on annual emissions of CO2.

Atmospheric concentrations
Carbon dioxide (CO2) accounted for about 83 percent of the total increase in radiative forcing by long-lived greenhouse gases over the past decade. The pre-industrial level of about 278 ppm represented a balance between the atmosphere, the oceans, and the biosphere. Human activities such as the burning of fossil fuels has altered the natural balance and in 2014, globally averaged levels were 143 percent of pre-industrial levels. In 2014, global annual average concentration of CO2 concentrations reached 397.7 ppm with annual increase close to the ten year averaged. The global annual average is likely to pass 400 ppm in 2016.

Methane(CH4) is the second most important long-lived greenhouse gas. Approximately 40 percent of methane is emitted into the atmosphere by natural sources (for example, wetlands and termites), and about 60 percent comes from human activities like cattle breeding, rice agriculture, fossil fuel exploitation, landfills, and biomass burning. Atmospheric methane reached a new high of about 1833 parts per billion (ppb) in 2014 and is now 254 percent of the pre-industrial level.

Nitrous oxide(N2O) is emitted into the atmosphere from both natural (about 60 percent) and anthropogenic sources (approximately 40 percent), including oceans, soil, biomass burning, fertilizer use, and various industrial processes. Its atmospheric concentration in 2014 was about 327.1 parts per billion. This is 121 percent of pre-industrial levels. It also plays an important role in the destruction of the stratospheric ozone layer which protects us from the harmful ultraviolet rays of the sun.

Water vapor
Water vapor and CO2 are the two major greenhouse gases. But it is CO2 which is the main driver of climate change. Water vapor changes are the so-called feedback mechanisms and happen as a response to the change in CO2. For a scenario considering doubling of is CO2 concentration from pre-industrial conditions, that is, from about 280 to 560 ppm, water vapor and clouds globally would lead to an increase in atmospheric warming that is about three times that of long-lived greenhouse gases, according to theBulletin.

— Read more in “The State of Greenhouse Gases in the Atmosphere Based on Global Observations through 2014,” WMO Greenhouse Gas Bulletin no. 11 (9 November 2015)