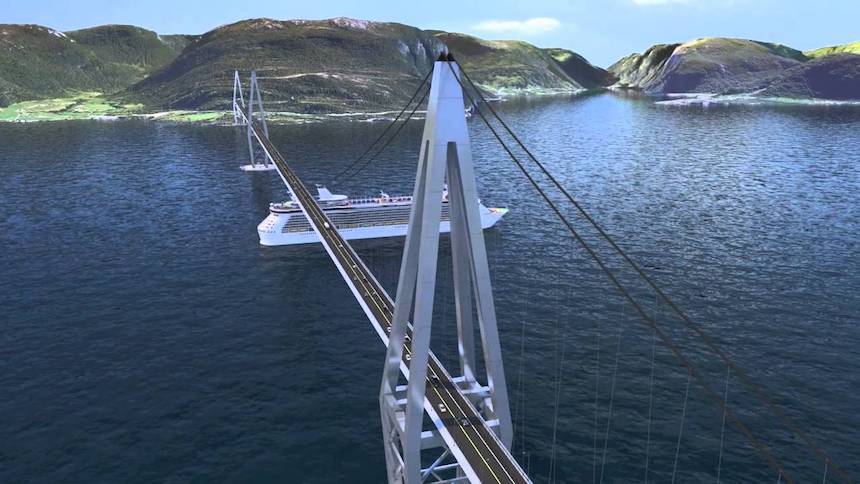 To succeed in this ambitious road project, top expertise within road and bridge construction will be involved, and the engineers will be developing new knowledge and technology.

Since 2013, the NPRA has been collaborating with a group of UiS researchers who have been investigating a new method for measuring wind. The method is being applied for the first time in relation to bridge design.

The longest bridge in the world
UiS says that the Bjørnafjord south of Bergen is one of the natural barriers that will be bridged in Ferjefri E39. With a water depth of up to 550 meters and a total length of around five kilometers, this is one of the three most difficult fjords to be crossed in this road project.

“It is the first time we develop a bridge of these dimensions. Gathering as accurate information as possible about waves, currents and wind conditions is therefore crucial”, says project manager Mathias Egeland Eidem from the NPRA.

The Bjørnafjord crossing will become the longest floating bridge in the world, that is, a bridge where the vertical load is supported by floating pontoons.

“It is important that the scientists go the extra mile. We need as accurate information as possible, for example about the wind conditions above the sea surface”, explains Eidem.

Wind measurement on the Lysefjord bridge
Traditionally, wind in a fjord is measured by the anemometers installed on the measurement masts on land. Three years ago, wind researchers from UiS started using optical remote sensing to monitor wind conditions.

Lidar technology involves emitting invisible light pulses into the air and measuring the signals backscattered from particles that move with the wind. The difference between the frequencies of the emitted and the received pulses, the so-called Doppler effect, reflects the wind velocity in the direction of the light pulse.

The UiS researchers were introduced to the lidar technology during their work in NORCOWE (Norwegian Center for Offshore Wind Energy). Inspired by the possibilities this technology offers, they started a pilot project on the optical wind sensing in the Lysefjord, in cooperation with the NPRA.

An extensive system for the long-term wind- and vibration monitoring, which the researchers already had in place on the bridge, since 2013, provided an excellent basis for the evaluation of the lidar wind measurements. The 640 meter long suspension bridge with the main span of 446 meters, is located at the inlest of the  Lysefjord  in Rogaland.

In 2014, the researchers expended the traditional wind measurements on the bridge by the optical remote sensing, in collaboration with NORCOWE researchers from the University of Bergen and Christian Michelsen Research (CMR). By placing a long-range lidar sensor at Lysefjordsenteret they were able to scan the wind around the bridge at a distance of almost two kilometers.

More detailed measurements
The results from the wind measurements with lidar technology on the Lysefjord bridge gave the researchers a real boost.

“It was encouraging to see that the wind velocities recorded from such a large distance matched well the data from the anemometers on the bridge”, says Jasna Bogunovic Jakobsen from the Department of Mechanical and Structural Engineering and Materials Science at UiS.

She has been carrying out researcher on wind loads and wind-induced response on long-span bridges for more than twenty-five years, and is leading the project on the on the application on lidar wind measurements in bridge engineering. The Lysefjord lidar test results paved the way for a further application and further development of the measurement technique adapted to bridge design.

“Until now we have only been able to acquire limited knowledge about the wind conditions out in a fjord. Lidar technology makes it possible to monitor the wind conditions at a number of locations across the entire fjord, that is without the influence and the disturbances from the surrounding terrain. The new method gives us more detailed knowledge about the conditions in the middle of the fjord, where the steady wind and the wind gusts typically have the strongest impact on the bridge”, explains Jakobsen.

In addition to the wind data acquired by the anemometers in some few points on land, the scientist now get information about the wind field along the entire bridge span.

“By using this measurement method we reduce uncertainty when estimating the wind loads and the wind effects on a bridge”, says the Professor.

Optimal design
The optical remote wind sensing has previously been applied in meteorology, aviation and in particularly for mapping the wind energy resources. Lidar wind measurements are for example used both “upstream” and in the wake of the wind turbines to optimize energy production and the wind turbine operation.

According to Jakobsen, this measurement method is valuable for the design of the bridges across large Norwegian fjords.

“This new measurement method is costly. However, it provides new, important data on the wind field at the bridge site, so that the bridge can be designed in a more optimal way, for the representative wind conditions.”, explains Jakobsen.

The longest floating bridge in the world
In spring 2016, Jakobsen and her team carried out a six-week measurement campaign in the Bjørnafjord, in collaboration with the Technical University of Denmark (DTU) and CMR.

Three laser sensors were placed on shore, with light beams directed towards the sea. The three lidars were integrated into a so-called wind scanner system, which enables simultaneous, coordinated measurements by the three measurement units.

Due to the large width of the fjord, a specially adapted measurement set-up and subsequent data analysis was required. The aim was to get as detailed and accurate information as possible on the spatial and temporal variation of the wind.

“A very long floating bridge is very sensitive to wind- and wave excitation. It is therefore important to connect the long-term, “point” wind measurements by anemometers on the met-masts on land to the actual wind conditions above the water, to ensure that we get the best possible estimate of how much the bridge will move and all the stresses wind creates in the structure.

Jakobsen and the post-doctoral researcher Etienne Cheynet are currently analyzing the measurement data from Bjørnafjorden.

Developing the calculation model
Lidar wind sensing makes it possible to also study the interaction between the air flow and the box girder.

In spring 2014, the research team therefore applied the Danish wind scanner system with two fast-scanning, short-range lidars, to study the air flow around the bridge. The wind velocity measurements downstream of the Lysefjord bridge revealed how the wind passes the bridge girder obstacle, including the vortices shed from the top and bottom surface of the bridge deck.

“This is fantastic!” exclaims Jakobsen and displays a colorful and detailed wind profile on the computer screen – a visualization of the air flow in the wake of the bridge.

“Until now we have been limited to small scale wind tunnel experiments or numerical computer simulations; now we can study the flow around the bridge girder in the field!”

The research team compares the recorded vibrations of the Lysefjord bridge to the estimated vibrations based on the wind load characteristics measured with small-scale models in wind tunnels. The aim is to develop as accurate calculation models as possible for bridge vibrations due to gusty winds.

Much of the work is already done
Mathias Egeland Eidem from the NPRA faces the following challenges as the head of the technology development work for the seven fjord crossings: If the design criterion for a bridge is set too low, this will make it less secure. If it is too high, the cost will go up.

It is crucial that he can rely on accurate information from experts regarding waves, currents and wind conditions.

Eidem will therefore be using this new measurement method in developing design requirements for new bridge projects in Ferjefri E39. In addition to the Bjørnafjord, this includes the Halsafjord and Sulafjord bridges.

“As lidar wind sensing is a relatively new technology in connection with bridge construction, it is important for us to collaborate with wind expertise at UiS. They can assist in developing a measurement system suited our needs”, says Eidem.

“When we have obtained sufficient data and developed an optimal calculation model, we will be able to set the correct design criterion for the bridge we are about to construct. Much of the work will then be behind us.