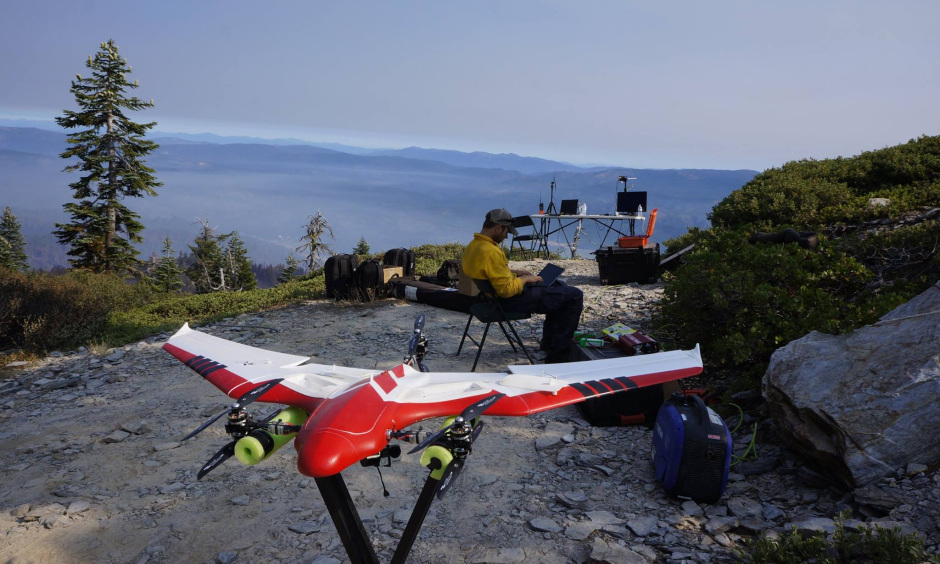 The U.S. Department of the Interior will soon have the use of up to fifty Vertical Take Off and Landing (VTOL) fixed wing unmanned aircraft systems (UAS). The small aircraft support DOI’s land stewardship responsibilities with advancements in technologies that improve resource management and facilitate emergency response.

This new tool was made possible after a lengthy process to develop mission performance requirements and select the most useful type of aircraft to meet the needs. A contract was awarded to American small business Birdseyeview Aerobotics of Andover, New Hampshire to produce and train on the new UAS.

“These new fixed-wing aircraft are another weapon in our arsenal as we remain committed to preventing the spread of catastrophic wildfires,” said U.S. Secretary of the Interior Ryan Zinke. “The UAS program continues to leverage technology to fight fires in safer and more efficient ways to ensure we are protecting the public, local communities and the men and women on the fire line.”

“Since its initiation in 2006, DOI’s UAS program is the recognized leader in safe and responsible use of UAS technology for our many land management programs,” said Harry Humbert, Deputy Assistant Secretary for Public Safety, Resource Protection, and Emergency Services. “The addition of this new aviation capability fulfills an important facet of DOI’s UAS Integration Strategy, so the scope of critical missions supported by UAS will increase.”

The aircraft weigh less than ten pounds and are capable of carrying a variety of modular sensors. In addition to being able to take off and land vertically in confined spaces, the new aircraft have a service ceiling of 12,000 feet and are able to operate in winds up to twenty-five knots. With an approximate wingspan of five feet, they can be quickly launched from spaces with a limited area, such as a boat.

“The extended range and endurance of these aircraft will provide our land managers, emergency managers, firefighters, and scientists with expanded aviation capabilities that continue to reduce the risk and cost of carrying out missions,” said the DOI’s Office of Aviation Services Director, Mark Bathrick. “Adding VTOL fixed wing UAS to our current fleet of rotary wing UAS is timely as we work with our Federal Aviation Administration (FAA) partners to extend the allowable range of UAS operations in remote locations or other areas where the terrain and other operational issues can restrict manned aircraft operations.”

DOI expects to use these aircraft across its mission portfolio to complement current UAS capabilities. The extended range provides increased safety and capabilities where DOI already has beyond visual line of sight (BVLOS) authority within Temporary Flight Restrictions (TFR), such as those established over large wildfires.

“Last year, thick smoke over some wildfires grounded manned aircraft for days, with only our UAS able to fly during these periods,” said DOI’s Office of Wildland Fire Director, Jeff Rupert. “This expanded capability lets us continue our wildland firefighting operations in conditions that would stop manned aircraft, and provide greater support to our firefighters.”

In 2017, DOI successfully employed UAS to support post event needs on hurricanes Harvey, Irma, and Maria, in addition to support provided to isolated flooding and landslide events. The new aircraft also hold promise in supporting DOI’s emergency response responsibilities beyond wildfires. They are easily customized for the types of fieldwork and emergency response operations performed. DOI will continue to maintain security and privacy requirements for encrypted control and payload links, as well as the ability to control whether any flight telemetry/mission data is shared.

DOI’s Office of Aviation Services is responsible for Department-wide functions related to aircraft services and facilities. Aviation safety is a primary consideration for all actions. As with DOI’s manned aircraft program, the UAS program supports DOI bureau mission needs with a combination of fleet aircraft and contracted commercial aircraft, and data services. In 2017, DOI flew nearly 5,000 UAS flights across a wide array of missions across the U.S. In 2018, DOI is predicting at least a fifty percent increase in UAS flights, due in part to the addition of this new fleet capability and the expected award of a commercial UAS services contract later this Spring.

Russian Spy Attack: How Likely Is a British Cyber Offensive Against Putin’s Regime