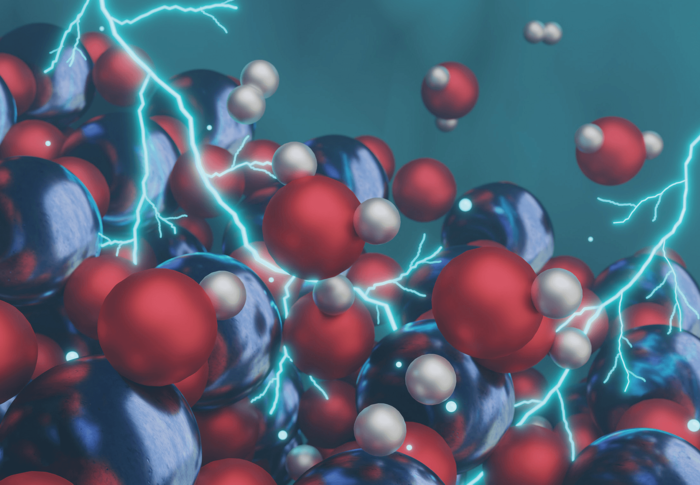 Engineers rely on catalysts for a vast array of applications from food manufacturing to chemical production, so finding efficient, environmentally friendly catalysts is an important avenue of research.

New research led by the University of Pittsburgh Swanson School of Engineering could lead to the creation of new, sustainable catalysts based on tungsten oxide and similar compounds.

The project used computational simulations to understand how tungsten oxide interacts with hydrogen at the molecular level and the findings were verified through lab experimentation.

A paper detailing the findings was recently featured on the cover of the Journal of the American Chemical Society (JACS) and was spearheaded by a team from the Department of Chemical and Petroleum Engineering: PhD Candidate Evan V. Miu, Assistant Professor James McKone and Associate Professor and the Bicentennial Alumni Faculty Fellow Giannis Mpourmpakis.

“Tungsten oxide is a catalyst that can be used to accelerate sustainable chemical conversions by using sunlight or renewable electricity. This chemical compound has a unique way of interacting with hydrogen atoms that makes it especially good at participating in chemical reactions where hydrogen needs to be produced or used” said Mpourmpakis.

“The types of chemical reactions that we are the most excited about include the use of hydrogen to take carbon dioxide—the primary culprit in global warming—and turn it into useful fuels and chemicals,” added McKone.

While most catalysts only interact with molecules like hydrogen on their surface, tungsten oxide can also insert hydrogen into its three-dimensional crystal lattice. The researchers’ advanced modeling was able to show that this process has a huge impact on what actually happens at the surface of the catalyst.

The work opens the possibility to design a whole new family of catalysts based on tungsten oxide and similar compounds, using the team’s computational approach to predict their catalytic properties.

“It is not an overstatement to say that we can draw a straight line between the subtle science contained in this study and the possibility of reinventing a huge swath of chemical manufacturing to make it more environmentally sustainable,” said McKone. “We can design catalysts to deliver hydrogen in just the right way to make chemical conversions that run on water and electricity just as efficiently as what we do today using fossil fuels.”

This project was a collaboration between Mpourmpakis’s CANELa Lab and the McKone Lab, where lead author Miu is an NSF graduate fellow working on bridging thermal and electrical catalysis through applying both experimental and computational methods.

“Working with professors Mpourmpakis and McKone has given me an unbelievable opportunity to operate at the interface of theory and experiment,” said Miu. “These complementary perspectives helped us deeply understand how metal oxide bronzes catalyze hydrogen, and we are excited to apply our findings and make meaningful steps towards more sustainable chemical processes.”

The article, “The Sensitivity of Metal Oxide Electrocatalysis to Bulk Hydrogen Intercalation: Hydrogen Evolution on Tungsten Oxide,” (DOI: 10.1021/jacs.2c00825) was published on March 15, 2022.