SilencerCo, the leading manufacturer and seller of gun silencers in the United States, wants the government to relax restrictions on the gun accessory – and Congress may soon help with the effort. Gun-control advocates disagree with SilencerCo’s attempt, but both groups argue that it is a matter of public safety.

Sound suppressors are one of the most heavily regulated products in the gun industry, regulated under the 1934 National Firearms Act Congress approved to address mob violence and the spread of new or modified firearms like sawed-off shotguns and machine guns. The law did not prohibit the ownership of silencers, but it did make it difficult to purchase or trade by adding a $200 fee, creating a federal registry, and extending the registration process. Gun owners claim that it now takes about nine months to buy a silencer. According to the Bureau of Alcohol, Tobacco, Firearms and Explosives, the number of registered silencers in the U.S. is close to one million.

NPR reports that some lawmakers are pushing legislation that would loosen those long-standing federal regulations, making silencers easier to buy for the general public. Rep. Jeff Duncan (R-South Carolina) proposed the Hearing Protection Act of 2017 in January and it has been referred to the House Subcommittee on Crime, Terrorism, Homeland Security, and Investigations. “This legislation is about safety — plain and simple,” Duncan said, in a statement after the bill was introduced. “I can’t tell you how better off the shooting sports enthusiasts would be if we had easier access to suppressors to help protect our hearing.”  The silencer industry, gun-advocacy groups, and some shooting-sports groups are in support of the legislation. They argue that the silencer is unfairly regulated and vilified.

Gun-control groups and congressional Democrats are pushing against the legislation, citing recent mass shootings and assassinations of police as examples of why guns should be loud and their sound recognizable. David Chipman, a senior policy adviser at Americans for Responsible Solutions and a retired twenty-five-year ATF veteran, says a silencer is “a threat to public safety.” He mentions the case of Christopher Dorner, a former Los Angeles police officer who used silencers during a two-day killing spree; though statistics shows that Dorner’s case is a rare one. Data from the ATF finds that from 2012 to 2015, 390 silencers were recovered from crime scenes; 600,000 pistols were recovered over the same period.

Chipman and gun-control groups argue that the reason silencers are so rarely used in crime is because they have been heavily regulated since the 1930s. “Right now the system seems to be working,” Chipman says. “…so why fix what’s not broke?”

Jason Schauble, the chief revenue officer at SilencerCo, says there is a misconception about the purpose of the silencer. “Most people know what they see in movies,” adding “And they see, oh, it’s always a spy, you know, somebody who’s involved in some sort of combat scenario [using them]. And then also, the sound that it makes is very, very quiet compared to what really happens.”

He argues that a silencer is “essentially a muffler for a gun,” it doesn’t silence a gunshot, it only suppresses it. “It’s still loud enough to hear,” Schauble says. “It’s just not loud enough to do permanent damage to your hearing, which is what most people who shoot and hunt are looking for.” 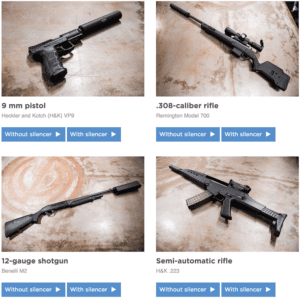