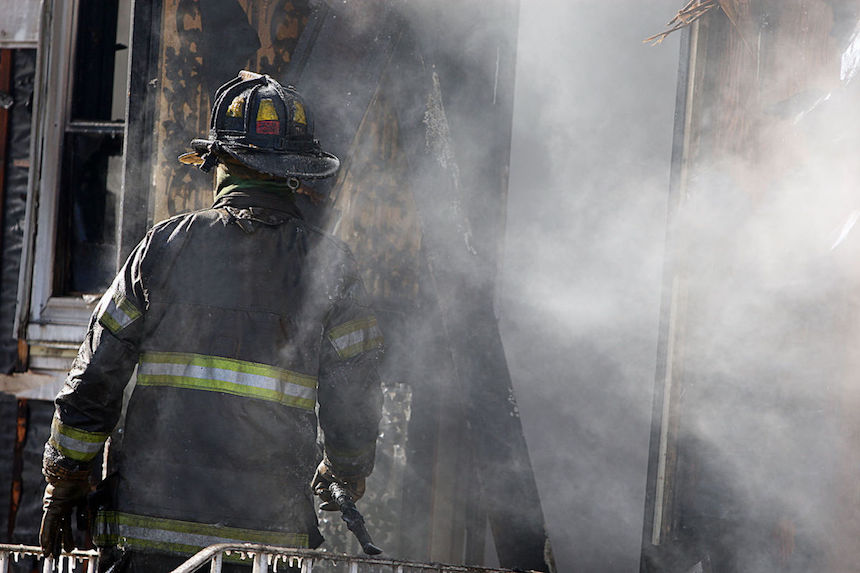 A new suite of personal protective equipment (PPE) may provide additional protection for firefighters from exposure to carcinogenic vapors and particulate matter at incident sites. The Smoke and Particulate Resistant Turnout Ensemble (SRT), developed by the Department of Homeland Security (DHS) Science and Technology Directorate (S&T) in partnership with the North Carolina State University Textile Protection and Comfort Center (TPACC) and tested with first responders, is now available for agencies to purchase from LION First Responder PPE, Inc.

“According to our colleagues at the National Institute for Occupational Safety and Health (NIOSH), the increased rate of cancer among members of the fire service, as compared to the general public, is quite alarming,” said S&T First Responders Group Program Manager Bill Deso, who led the research and development effort. “NIOSH studies have determined that over time, chronic exposure to toxic particulates in fireground environments contributes significantly to an increased cancer risk. We worked with TPACC and LION to develop turnout ensemble garments that afford firefighters the same level of fit, functionality and comfort as their existing turnout gear with added protection from particulate infiltration at garment interfaces.”

Areas around the wrists, ankles, chest, stomach and neck where gaps in jackets, fasteners, wrist/glove interfaces, boot/pant leg interfaces, and the gap around the jacket hood and SCBA mask allow infiltration of particulates into existing turnout gear. While the self-contained breathing apparatus protects responders’ respiratory tracts from combustion products in smoke and soot, hazardous vapors and particulates can still be absorbed into their skin when smoke penetrates these PPE interfaces.

To mitigate this, S&T developed two SRT ensemble concepts based on LION’s V-Force® turnout garments. The first concept, now available for purchase, consists of a jacket and pants with particulate impermeable fabrics at the wrists, calves and ankles, and in an internal skirt structure in the coat that prevents particulates from entering the abdomen/chest area. All of the protective features added to the V-Force® garments to develop the SRT concept garments can also be retrofitted into existing turnout gear.

The second ensemble concept also incorporates these enhancements, minus the particulate skirt structure in the jacket. The pants for concept two include a removable bib that covers the upper chest, adding additional protection from particulate infiltration for the chest area. This ensemble should be available for review at the 2018 FDIC Conference. Both ensembles are currently National Fire Protection Association (NFPA) 1971, 2013 edition certified. They will be certified to the NFPA 1971, 2018 edition in the near future.

S&T, TPACC and LION recently conducted an operational field assessment of the ensembles with several firefighters at the U.S. Fire Administration Academy in Emmitsburg, Maryland. “In the fire service as a whole, the cancer rates are way beyond the acceptable levels. Exposure to particulate matter and when the gas vapors come through, that’s huge,” said Steve Vandewalle of the San Diego Fire-Rescue Department.

Jason Smith of the Montgomery County (Maryland) Fire-Rescue Department agreed. “The ensemble that they’ve created is a great first step. It’s taking one facet of potential exposure and removing it from the system…It’s definitely a step in the right direction.”

What draws ‘lone wolves’ to the Islamic State?