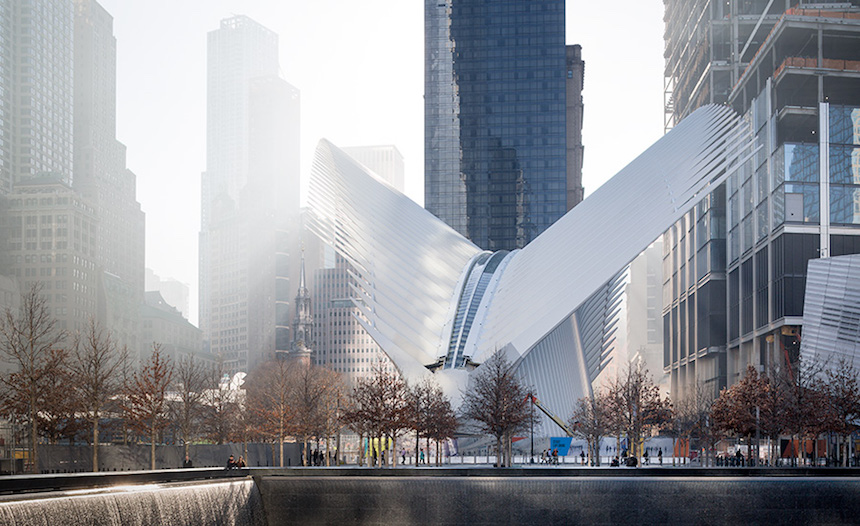 In New York, a new magnificent architectural wonder in white, the World Trade Center Transportation Hub, also known as the Oculus, attracts tens of thousands of commuters and visitors every day. The Oculus, which opened last year, lives up to both meanings of its name—‘oculus’ from Latin means ‘eye’ and ‘opening’.  On the inside, the ceiling is shaped like an eye with a horizontal pupil. On the outside, the empty space above the structure, an opening between skyscrapers, lets sunlight hit the memorial footprints of the Twin Towers during the fall equinox. The Hub connects two subway systems and provides access to multiple buildings that make up the World Trade Center.

However, even the most beautiful and useful places are not immune to danger from terrorist chemical attacks.

To protect both the people and the World Trade Center Transportation Hub, the Department of Homeland Security (DHS) Science and Technology Directorate (S&T) entered into an agreement this spring with the Port Authority of New York and New Jersey to begin the design, establishment, operation and maintenance of a chemical detection testbed for identifying hazardous gases. A testbed is an environment where technology is positioned and tested. Together these institutions will examine the performance and effectiveness of already existing devices and will choose the most suitable ones for the Oculus.

“The goal is to achieve independent detection by at least two different types of sensors in the event of an intentional release of a chemical dangerous to the public and employees in the Oculus,” said Don Bansleben, program manager in S&T’s Chemical and Biological Defense Division. The results from this testbed could be integrated into the Port Authority’s operational and emergency plans to enhance security and public safety measures.

Intentional gas poisoning in public transportation dates back before 9/11. In 1995, a terrorist group called Aum Shinrikyo released self-made sarin nerve gas from a bag they left in a Japanese metro station. The gas killed 11 people and injured about 1,000. Chemicals, such as sarin gas, mustard gas and chlorine, a widely produced industrial chemical, have also been used in recent wars – the Iran-Iraq War in the 1980s and, most recently, in the Syrian conflict.

Although nearly all countries in the world have signed a Chemical Weapons Convention treaty for prohibiting the production and usage of chemical warfare agents, “there is a concern that people can secretly make these types of deadly chemicals, and easily walk in the subway with a backpack and release them,” said Bansleben. “To save lives, the Port Authority is interested in protecting this very large space.”

The Oculus is not the first place to be equipped with chemical sensors. U.S. public transportation spaces such as the Grand Central Terminal in New York City, and Washington, DC metro system have used such devices since the early 2000s. Hidden in nonobtrusive vented cabinets, chemical detectors are constantly sampling and scanning the air, looking for hazardous gases.

S&T, who funds this project, contracted the Argonne National Laboratory to install chemical sensing technology in a fashion to achieve maximum coverage of the volume of the Oculus. To achieve more reliable detection, the Lab will install different types of sensors that use two different physical techniques—point and standoff. If both techniques independently confirm a dangerous chemical present in the area, authorities will be alerted that a hazard is present.

Point detectors register only substances that are close to them. These detectors sample the air to look for hazardous gases using Ion Mobility Spectroscopy and compare them quickly to a library of chemicals.

“For example, one of these sensors may be sending an infrared beam across a large space, and if the beam passes through a cloud of hazardous material, it may absorb the energy,” said Bansleben. “Every molecule has a fingerprint in the infrared region and will absorb energies at different frequencies; if there is a match, security would be alerted.”

Sometimes cleaning chemicals may cause an alarm to go off because of a similarity in a physical property to a threat chemical. False alarms, if they were to occur often, are problematic because they may cause unnecessary evacuation and thus make the technology unreliable. “Combining multiple

If a sensor at a certain location identifies a hazard, it will alert the local operations center. Then the operators will notify security and, if needed, the Fire Department, First Responders, and the Police. If the authorities predict a wide spread of the chemical, they will evacuate the public immediately.

The project started just after September 11 this year, and the detectors, which will not be in plain sight, will be tested in the Oculus for a period of 12 months under S&T’s guidance. This period allows the Argonne National Lab to see how accurately the devices work, analyze collected data, and work with detector vendors to improve the technology.

After a year of successful testing, the Argonne National Lab will teach the Port Authority how to use the chemical detectors for another year. Then in 2019, S&T anticipates donating most of the detectors to the Port Authority so that it integrates them into its emergency response actions.

“The World Trade Center is something that has a lot of meaning for this country since 9/11,” said Bansleben. “We are proud to support and protect public transit systems from terrorism.”