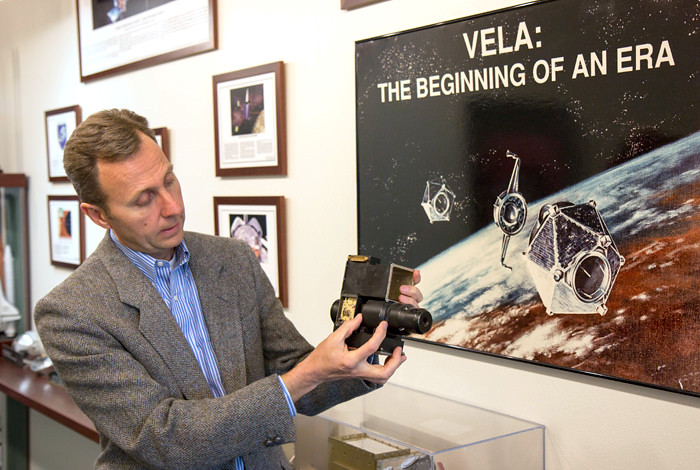 If North Korea or anyone else were to detonate a nuclear weapon in the atmosphere or in space, how would we know? A fleet of sensors aboard satellites would tell us. Many of those sensors in space are the brain-child and product of Los Alamos National Laboratory.

Detecting nuclear explosions from space is a complex and difficult endeavor. Highly specialized instruments must operate continuously and autonomously for years in the harsh environment of space.

The Lab knows that tough and dynamic problem all too well. For decades it has tapped into its nuclear expertise to help solve national security challenges.

“Our mission is unique. We are the only ones in the world who do it,” says Intelligence and Space Research (ISR) Division Leader Herbert Funsten.

That critical national security mission has brought together scientists, engineers and technicians from all over the world to Los Alamos.

“It’s intriguing and a very difficult problem that I enjoy learning about,” says Amanda Madden, an early career scientist who develops nuclear detonation sensors as part of the Laboratory’s ISR division.

“I can do science and physics that has meaning for a global community, and that’s what keeps me running on the day to day.”

Setting the stage for satellite-based monitoring from space

For nearly 60 years, the Laboratory has designed, built and operated sensors, and instrumentation systems to monitor nuclear explosions from space.

“We have a unique insight,” says Marc Kippen, Los Alamos program manager for Nuclear Detonation Detection. “We know what to look for and how to optimize our sensors to determine if something is nuclear or not.”

In the early 1960s, the U.S. government chose Los Alamos to develop space-based nuclear detonation detection technology when it signed the Limited Test Ban Treaty of 1963, an agreement that prohibits countries from testing nuclear weapons in space and the atmosphere.

One week after the treaty went into effect, the Laboratory executed its nascent monitoring role when its sensors were carried into space with the debut of the Vela satellites. “We built these sensors in about one year,” says Funsten. “That was some extreme engineering,” he adds, referring to the ingenuity of the Lab’s pioneering space researchers, scientists and engineers.

Los Alamos delivered its sensors despite facing several challenges – little knowledge about the harsh space environment the detectors would operate in and immature technology. “There was a lot of risk in designing these instruments to withstand that environment for years but we succeeded,” notes Herbert.

From the early 1960s to the mid 1980s, a series of 12 Vela satellites were sent into space — each with a suite of Los Alamos instruments  — to detect radiation from potential nuclear events from both high and low altitudes.

“The fact that they were able to get a global monitoring system up in space within a few years was in and of itself just amazing,” says Kippen.

The sensors from the Vela satellites also made scientific advances, such as the serendipitous discovery of cosmic Gamma Ray Bursts emitted from supernova, the last death throes of massive stars and the most powerful explosions in the universe.

The improved versions of these satellites were the testing grounds for the next superior space-based monitoring system – The Defense Support Program or (DSP) satellites.

In a collaboration with Sandia National Laboratories and the U.S. Air Force, the Lab’s sensors aboard these satellites continue to provide enhanced global monitoring of nuclear explosions.

“These systems on DSP were much more capable, reliable and more rigorous than those on Vela,” notes Kippen. “There was a lot more knowledge of how to design things specifically to operate and survive in space.”

The nuclear detection systems fielded on DSP satellites evolved again starting in the 1980s to leverage the unique capabilities of the new (at the time) Global Positioning System or (GPS).

Sensors on GPS  —  a constellation of around 30 satellites — use the precision GPS position, navigation, and timing capabilities to pinpoint the location and time of nuclear events. It provides precise data about where and when a nuclear detonation occurs on the globe.

“Getting our sensors onto that unique GPS platform gives you global, persistent monitoring with accurate timing of a nuclear event,” says Kippen. “Combined with sensors on other satellites allows us to detect and locate nuclear detonations anywhere, anytime.”

Today, Los Alamos payloads on GPS, including other satellite platforms, play a crucial role as the nation’s eyes and ears to support the national security mission.

With budding nuclear threats, the Lab’s sensors are also evolving to detect explosions from a variety of nuclear weapons. “From a signal detection perspective, it has changed the nature of what we are looking for,” notes Kippen.

“We want to make sure the President knows if something was or wasn’t nuclear with very high confidence to best inform subsequent decision making,” notes Kippen.

The Lab also conducts modeling and simulations to rigorously test and quickly analyze data from its sensors in case of a potential nuclear explosion. “We are trying to use what’s up there as best as possible and pushing it to its extreme capability,” says Kippen. “At the same time, we are building enhanced capability into the future systems.”

“We have to get the best, be the best, and do the best science and technology, and discover new things in order to do our national security mission,” notes Funsten. “We keep our scientists and engineers very busy.”

It takes at least a 10-year vetting process to identify suitable sensor technology and test it thoroughly before it is flown in space.

Optimizing sensors involves identifying components that are small, weigh less and save power.

Madden is pursuing that process and investigating the viability of new detectors.  “I am trying to determine if it is worth investing more time and money in testing them to eventually send them up into space,” explains Madden.

A dedicated workforce with a passion for the mission

As an early career scientist Madden learns from and works with the Lab’s best and the brightest experts who’ve mastered the skills to address national security challenges.

“People here have this broad expertise and have been involved in these missions for decades,” says Madden. “They are brilliant and willing to share their knowledge with the next generation of scientists.”

The Lab’s greatest asset — its committed workforce — is the collective, powerful human engine that continues to bring sustained success in delivering national security solutions. “What drives the satisfaction for our people to really commit to getting this done is the technology that’s going to be deployed somewhere for a real mission,” explains Kippen.

In addition to executing the national security mission, Los Alamos also plays a key role in space exploration and basic science. Science missions like the Lab’s ChemCam instruments are investigating the potential of life on Mars and discovering minerals that suggest the presence of water on the Red Planet.

Technologies that are not ready for prime time in nuclear detonation detection are often tested by scientists in the NASA space programs. “We can exercise our scientists in the latest, greatest things and some of that comes back to supporting the national security mission,” says Kippen.

“There’s a thirst for innovation and discovery among scientists and engineers,” says Funsten. “We can slake that thirst and at the same time contribute to something that’s important for societal benefit and important for the nation.”

“We are like a global watchdog,” notes Madden. “I think it would make people feel safer to know what an active role the government plays in the nuclear deterrent.”

PERSPECTIVE: Why Don’t STEM Majors Vote as Much as Others?

DHS-Funded Tools Help Get Ahead of Storms