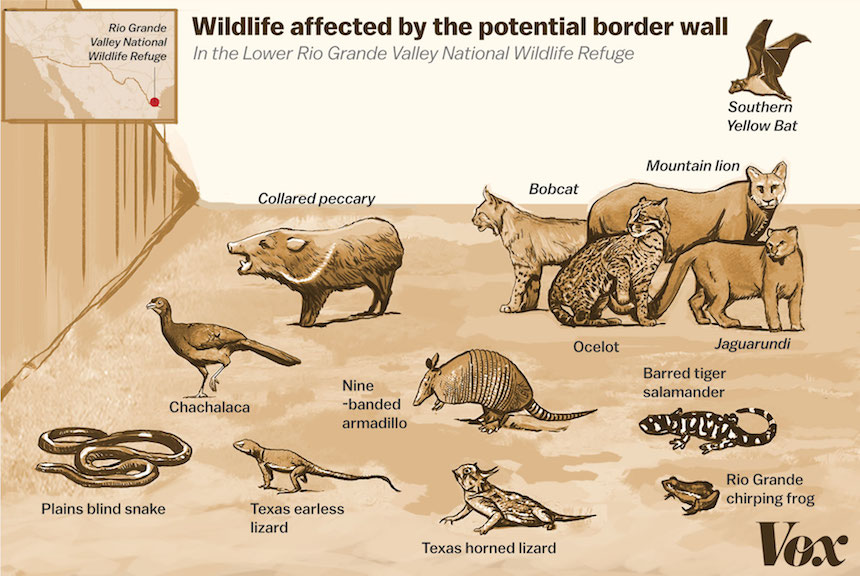 President Donald Trump’s desire for a wall along the U.S.-Mexico border has elicited endless questions since it was introduced as a major theme in his campaign. Who will pay for it? How will it be constructed? Is it the most effective strategy? What is the timeline? A Rice University biology expert is asking another question: What are the ecological and evolutionary consequences of the wall?

“Evolutionary effects from the wall can change the balance of nature along the U.S.-Mexico border, putting wildlife in the area, including more than 100 endangered species, at risk,” said Scott Egan, an assistant professor of ecology and evolutionary biology at Rice. “Some of the larger animals that will be threatened by the border wall are the jaguar, ocelot, jaguarundi, Mexican gray wolf, desert big horn sheep and pronghorn antelope.”

Rice quotes Egan to say there are two important phenomena to consider when building any type of barrier that interrupts animal or plant movement. First, a barrier like this would cause a population bottleneck, which is a sharp reduction in the size of a population that would be caused by a barrier effectively cutting a species into two parts. This bottleneck reduces the number of breeding individuals and the amount of genetic variation in a population, which reduces the ability of the population to survive changes to the environment, like climate change or shifts in available resources. This would be most pronounced for species with small ranges that overlap with the border or with large ranges where just a small part is on one side of the wall, which would isolate such groups.

Second, a barrier to the natural exchange of genes in a population can increase inbreeding, in which related individuals are more likely to mate and reproduce. Inbreeding increases homozygosity within a population, which can increase the expression of deleterious genetic mutations. This generally leads to inbreeding depression or the decreased fitness of the population.

Egan said the Florida panther is an example of human-induced isolation of an animal population that has led to a population bottleneck and inbreeding depression.

“The species historically lived across the Southeastern United States, but due to overhunting and habitat destruction, a small remnant set of populations lives in southern Florida isolated from all other panther populations,” Egan said. “Just as evolutionary biologists predicted, Florida panthers experienced a reduction in genetic diversity and an increase in homozygosity. This has led to increased heart defects, low sperm counts and increased susceptibility to infection consistent with increased expression of deleterious mutations.”

In addition to the risks to plants and animals when humans change an environment, Egan said, evidence reveals negative impacts on humans as well.

“One highly relevant comparison comes from a border wall that was built between India and Pakistan in the Kashmir region,” Egan said. “The border wall interrupted the natural movement of Asiatic black bears and leopards in this region, which decreased their access to natural prey and increased their movement into villages, sometimes targeting humans as prey. This then increased the frequency of humans killing the animals to prevent further attacks or to retaliate against previous attacks.”

In addition to the proposed wall intersecting the natural range of some species, Egan is concerned by two other potential effects: cutting off natural migration routes and future range expansions driven by climate change.

“There are many animals that naturally migrate across the border each year, such as the black bears in West Texas, or the pronghorn antelope across the Southwest. Interrupting these natural movements could have devastating effects on these species on both sides of the border,” Egan said. “Similarly, the border wall will trap populations that continue to move north in response to a warming and changing planet, potentially killing individual animals and populations or resulting in the future extinction of entire species unable to find habitats south of the border to survive.”