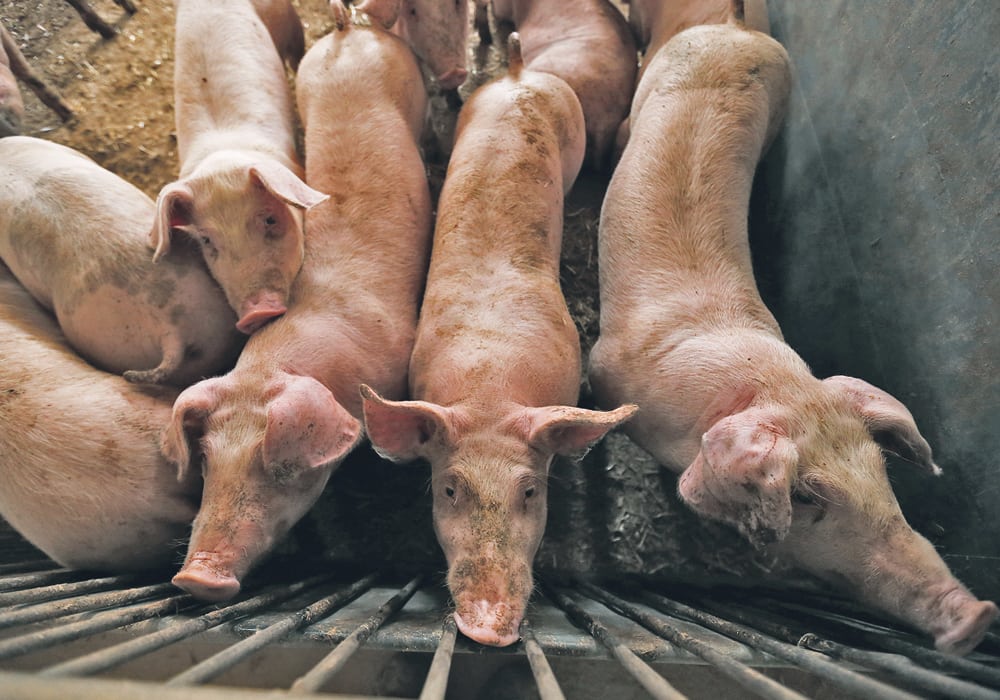 Thousands of pigs in China have been dying since August 2018. The cause is a virus that infects a pig’s macrophages, a type of white blood cell that acts as a warrior against disease-causing invaders. This viral disease, called African swine fever, can wreak havoc in a pig’s body causing internal bleeding and resulting in almost 100 percent mortality of the infected pigs. Because African swine fever is highly contagious and deadly to pigs, economies and the food supply are being affected around the world. (The virus does not infect humans.) For instance, with 500 million pigs, representing half of the world’s pig population, China leads in global pork production. And now their pork is banned for export. African swine fever has never been found in the United States.

The disease has been on the Department of Homeland Security (DHS) Science and Technology Directorate’s (S&T) radar for several years. S&T intensified vaccine research efforts in collaboration with the U.S. Department of Agriculture (USDA) in November 2018. The African Swine Fever Task Force was born, based out of S&T’s Plum Island Animal Disease Center (PIADC).

“There is no vaccine. In addition to killing most infected pigs, African swine fever also gets into the background in ticks and is very difficult to eradicate,” said Dr. Larry Barrett, S&T PIADC Director. “We put together the Task Force to tackle, over the next three years, this new threat for our swine industry. The primary focus is to improve diagnostics and vaccines, so pork producers can protect their animals in the future.”

DHS and USDA together intercept pork and other inadmissible agricultural products at all ports of entry. USDA’s Animal and Plant Health Inspection Service (APHIS) placed stronger import restrictions on pork and instructed the 2,000 DHS Customs and Border Protection (CBP) inspectors to be on high alert for passengers and products arriving from China and other affected countries.

“We increased vigilance at all ports of entry to try to detect and confiscate those pork products before they get into the country,” said Dr. Kimberly Dodd, chair of the Task Force and Director of APHIS’ Foreign Animal Disease Diagnostic Laboratory (FADDL).

This vigilance paid off on March 16, when CBP seized, with the help of trained USDA beagles, one million pounds of illegal products containing smuggled pork from China at the Port of New York and New Jersey where the government destroyed the entire seizure.

History of the disease and the fight against it

African swine fever, indigenous to Africa, infects only domestic and wild pigs and a species of soft ticks that transmits the disease. The disease emerged in Africa in the 1920s and spread among domestic and wild pigs. Then in 1957 it suddenly appeared in Portugal after pigs near the Lisbon Airport were fed airplane leftovers containing infected pork. Undercooked or uncured pork like dry sausages have tested positive for African swine fever virus. Spain was also affected. Subsequently, small outbreaks appeared in other European countries and the Caribbean in the next three decades. In 2007, the viral disease showed up in the Republic of Georgia and spread through the Caucasus region, and then it eventually reached China in August 2018 and then Mongolia in January and Vietnam in February this year. Japan detected their first case of infectious African swine fever in late March.

Initial research in the United States on African swine fever started in the 1970s when the viral disease was spreading through Spain and Portugal. In the 1990s, USDA’s Agricultural Research Service (ARS) started looking for a vaccine. First, ARS focused on the DNA genome of the virus—containing more than 150 different genes—to find the genes that cause sickness, switch them off and create a live attenuated vaccine (a weakened virus that induces immune reaction without causing sickness). Attenuated vaccines defeated measles and polio and eradicated smallpox.

“Unfortunately, that research ended in 2004, because we did not have enough funding,” said Dr. Luis Rodriguez, the research leader of the ARS Foreign Animal Disease Research Unit. He leads vaccine development in the Task Force.

PIADC resumed the research in 2008 under the leadership of Dr. Manuel Borca, a world renowned scientist for his work on African swine fever, after the disease broke out in the Republic of Georgia.

“In great part, that re-initiation was made possible by the support of DHS S&T,” said Rodriguez. “S&T continues to be a big supporter, mostly through interagency agreements, investing millions of dollars in the research program on African swine fever. We signed a new agreement last year to continue supporting rigorous vaccine research.”

To develop vaccines, researchers use genetic engineering to create African swine fever viruses that grow in pig macrophages but are weakened and do not cause disease when inoculated in pigs. Then, researchers test these pigs to determine if the weakened virus induced protection against the wild type virus.

Although several good candidates have been found using this method, a vaccine is not yet ready. Far from it. Currently, there are two vaccine candidates that need to be developed into vaccines in an established cell line (a cell culture that can be indefinitely maintained in vitro). Establishing a cell line has proven to be difficult.

“We need a better method,” said Rodriguez. “Part of S&T’s funding is for exploring the existing cell lines to see if we can find any that are promising for vaccine production.”

“FADDL is the national reference laboratory for foreign animal diseases, including African swine fever, and is responsible for supporting first-line diagnostic testing at the National Animal Health Laboratory Network, as well as providing all confirmatory diagnostic testing for suspect cases,” said Dodd. “Two of APHIS’ current development efforts are directly supported by collaborations within the Task Force.”

To support more rapid collection of samples from suspect animals, USDA is evaluating the utility of oral fluid samples for detection of African swine fever as a population-level test. The oral fluids are obtained by hanging a rope in a pen with pigs, because pigs are naturally inquisitive and would chew on it. After the animals have had a chance to chew on it, the oral fluids can be collected from the rope and tested for the virus. Through an international collaboration with colleagues at the Canadian Food Inspection Agency, APHIS is currently assessing the performance of existing tests for African swine fever on this novel sample type and expect to have results this spring.

In another cross-agency effort, USDA and S&T are collaborating to identify a more rapid way to isolate African swine fever virus from animal samples. This is important for two reasons. First, virus isolation is considered a ‘gold-standard’ diagnostic test because it demonstrates that live virus is present in the sample. Second, it provides an opportunity to amplify the virus for additional future testing, including full-genome sequencing. Virus isolation also supports additional diagnostic and vaccine development efforts, performed by APHIS and ARS, respectively.

“Thanks to the shared efforts of its members, the Task Force is making rapid progress to identify a more efficient cell type to use for virus isolation,” said Dodd.

Once the two current vaccine candidates are transferred to industry partners, PIADC will help them develop vaccines. Neilan thinks that it will be a great success if the Task Force reaches the next step of vaccine development within three years.