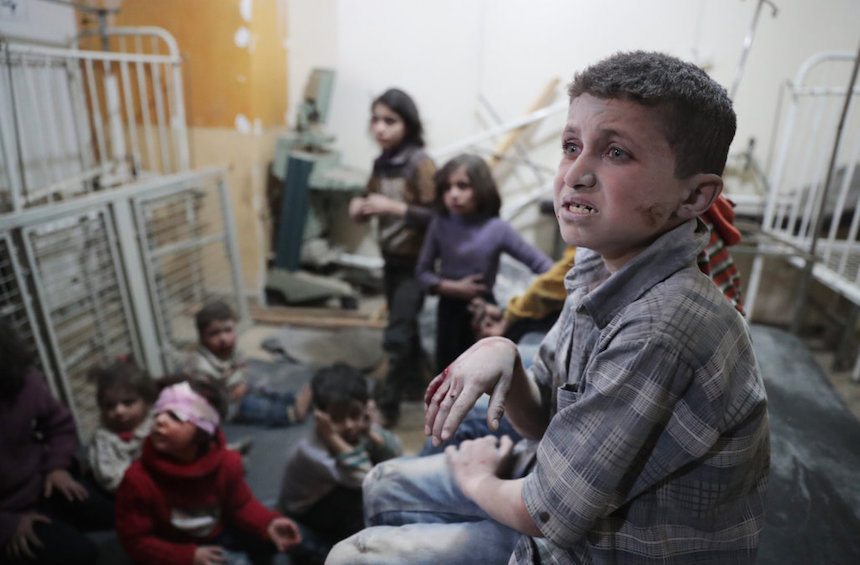 At least fifty-eight people were killed in a chemical attack the Syrian military launched by against a rebel-held Syrian town in Idlib province. Medics rushed scores of injured civilians to a hospital – but the Syrian air force then bombed the hospital, reducing it to rubble. The London-based Syrian Observatory for Human Rights group said there were eleven children among the dead, although it was not clear whether the children were killed by chemical weapons, or in the attack on the hospital.

Mohammed Rasoul, the head of a Syrian ambulance service, told the BBC that first responders found people choking in the streets.

The BBC reports that it was the third claim of a chemical attack in Syria in just over a week. The previous two were reported in Hama province, in an area not far from Khan Sheikhoun, the site of Tuesday’s attack.

Tuesday’s reports came on the eve of a major international meeting in Brussels on the future of Syria and the region, to be hosted by the EU’s High Representative Federica Mogherini.

The Syrian American Medical Society, which supports hospitals in opposition-held territory, said it had sent a team of inspectors to Khan Sheikhoun before noon and an investigation was underway.

The Organization for the Prohibition of Chemical Weapons (OPCW) this morning issued this statement:

The Organization for the Prohibition of Chemical Weapons (OPCW) is seriously concerned about the alleged chemical weapons attack reported by the media this morning in the Khan Shaykhun area of southern Idlib in the Syrian Arab Republic. The OPCW’s Fact Finding Mission (FFM) is in the process of gathering and analyzing information from all available sources. The FFM will report its findings to the OPCW’s Executive Council and States Parties to the Chemical Weapons Convention.

The OPCW strongly condemns the use of chemical weapons by anyone, anywhere and under any circumstances.

Witnesses said the chemical were spread by missiles fired from warplanes, but that they could not tell whether the planes were Syrian or Russian.

Many of those injured in the attack were transferred to a hospital in the town of Sarmin, located about thirty miles from the scene of the attack. Mohammed Hassoun, a media activist in the town, said the hospital there has the equipment to treat people injured in chemical attacks. NGOs helped the hospital get the equipment because the Assad regime has repeatedly used chemical weapons to attack rebel-held areas in the province.

“Because of the number of wounded, they have been distributed around in rural Idlib,” he told the AP by phone. “There are eighteen critical cases here. They were unconscious, they had seizures and when oxygen was administered, they bled from the nose and mouth.”

Hassoun is documenting the attack for a media group, and he said the doctors at the hospital have said it is likely more than one gas.

“Chlorine gas doesn’t cause such convulsions,” he said, adding that doctors suspect sarin was used.

The symptoms of an attack by sarin gas are different from the symptoms of a chlorine attack. While both chemicals disrupt the body’s respiratory system, leading to suffocation, sarin gas attacks the body’s nervous system more generally, causing involuntary convulsions, foaming at the mouth, eyes which are not responsive to light, and other symptoms absent in a chlorine attack.

Since ISIS does not have access to sarin, or to airplanes and air-to-surface missiles, military analysts say that Tuesday’s attack was carried out by the Syrian military.

Photos and videos posted on social media by activists and doctors on from the scene of the attack and centers of treatment show limp bodies of children and adults foaming at the mouth. A doctor in one of the hospitals in Idlib posted a video on his Twitter account, showing of three victims, all with narrow, pinpoint pupils which did not respond to light.

Idlib province is largely controlled by anti-regime rebel groups, and it is also home to nearly one million Sunni refugees from other parts of Syria.

A joint investigation by the United Nations and OPCW determined the Syrian government was behind at least three attacks in 2014 and 2015 involving chlorine gas, and that ISIS was responsible for at least one involving mustard gas.