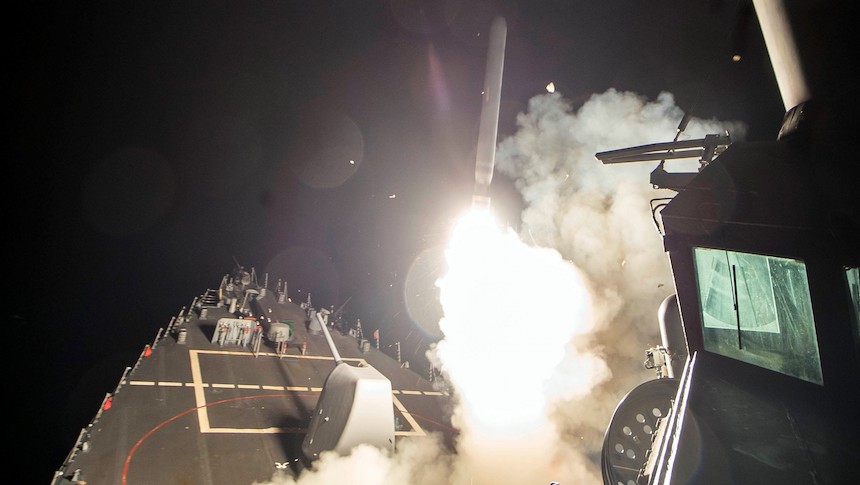 The United States has launched fifty-nine Tomahawk cruise missiles on a Syrian airfield from which Syrian military planes three days ago flew to carry out a sarin gas attack against Sunni civilians in the rebel-held Idlib province.

More than eighty people, including thirteen children, were killed in the attack – and in a subsequent attack by the Syrian Air Force which destroyed the hospital to which many of the victims of the gas attack were taken.

The cruise missiles were launched from the guided-missile destroyers USS Ross and Porter in the eastern Mediterranean.

The United States has had military advisers and specialist on the ground in Syria for a while – it now has about 1,000 soldiers in Syria — advising the anti-regime rebels – especially the Syrian Kurds – but last night cruise missile attack marks the first time the United States has been involved as a combatant in the Syrian conflict.

Russia described the strike as an “aggression against a sovereign state in violation of international law.”

Russia has also said that it would suspend an agreement with the United States to share information about Russian and U.S. flights in the skies above Syria in order to avoid incidents.

Moscow said it would call on the UN Security Council to discuss the U.S. strike.

The Independent reports that Syrian officials said seven people were killed and nine wounded in the attack.

Both Syrian and Russian sources said that no Russians were killed or injured in the attack. Sergei Lavrov, Russia’s foreign minister, currently on a trip to Uzbekistan, said the strike was launched on an “absolutely made-up pretext,” adding: “It reminds me of the situation in 2003 when the United States and Britain, along with some of their allies, attacked Iraq.”

Lavrov added that Russia would demand an explanation from the United States why the strike was launched. “I hope this provocation will not lead to irreparable damage [to U.S.-Russian ties],” Lavrov said.

The target of the attack was an airfield at al-Shayrat, near Homs, from which the Syrian military launched its sarin gas attack on Tuesday. To facilitate the attack, some of the U.S. cruise missiles were used to destroy Syrian air defense assets – but military analysts note that the damage to the Russian-built Syrian air defenses was limited, in keeping with the limited nature of the attack.

The Pentagon, in a statement, said, the U.S. military attacked “aircraft, hardened aircraft shelters, petroleum and logistical storage, ammunition supply bunkers, air defense systems, and radars” at the al-Shayrat airbase. The Pentagon added that the strike “was intended to deter the regime from using chemical weapons again.”

News reports on Russian state TV said that nine Syrian air force jets had been destroyed in the attack.

Lavrov’s charges that the U.S. attack was carried out based on made-up excuses was echoed by Vladimir Putin’s spokesman, Dmitry Peskov, who said that Putin believes the United States had carried out the strikes under a “far-fetched pretext.”

Russia initially denied that the Assad regime was behind the chemical attack earlier this week, but then changed its line to argue that the death of civilians resulted from Syrian military inadvertently hitting a rebel chemical arsenal.

Military experts and specialists in chemical weapons said this argument was laughable.

Sources told the Guardian that U.S. intelligence agencies believe Russian military personnel were at the al-Shayrat airbase when sarin gas munitions were loaded on to a Syrian jet. It is not clear whether the Russians were aware of the nature of the munitions.

“We are assessing the results of the strike,” Davis said. “Initial indications are that this strike has severely damaged or destroyed Syrian aircraft and support infrastructure and equipment at Shayrat airfield, reducing the Syrian government’s ability to deliver chemical weapons.”

Davis said the airbase hit last night was used to deliver the chemical weapons dropped on Khan Sheikhun, but could not confirm whether any chemical weapons were still at the site. He stressed that the targets were chosen carefully to avoid the risk of hitting those weapons.

“The places we targeted were the things that made the airfield operate. It’s the petroleum facilities, it’s the aircraft radar, what they use for takeoff and landing, as well as air-defense radar,” Davis said. “It’s the sites that are specific to making it operate, as well as hangars and aircraft themselves.”

Davis also said that precautions were taken to avoid killing Russian personnel on their compound at al-Shayrat, citing the timing of the attack and the choice of targets unlikely to have people inside. All the aircraft attacked were Syrian, he stressed.

The attack marks a change of course for Trump. Russia has been one of Assad’s staunchest ally, and Trump had criticized the Obama administration for making the removal of Assad from power a central goal of U.S. policy in Syria. During the presidential campaign, Trump pointed to Assad as someone with whom the United States should cooperate in the war against ISIS.

Only three days ago, both Secretary of State Rex Tillerson and UNambassador Nicky Halley made statements indicating that Trump was prepared to allow Assad remain in power.

Two senators who consistently criticized Trump for his views on Assad — John McCain and Lindsey Graham – issued a joint statement supporting the attack.

Trump and the military “sent an important message the United States will no longer stand idly by as Assad, aided and abetted by Putin’s Russia, slaughters innocent Syrians with chemical weapons and barrel bombs”, the two Republican senators said.