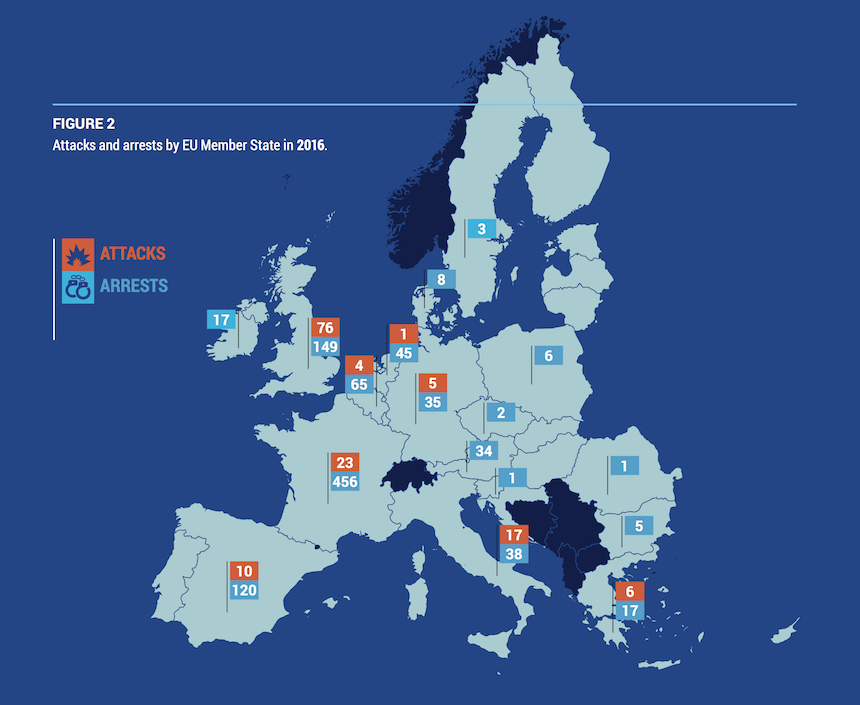 In 2016, a total of 142 failed, foiled and completed attacks were reported by eight EU member states. More than half (76) of them were reported by the United Kingdom. France reported 23 attacks, Italy 17, Spain 10, Greece 6, Germany 5, Belgium 4, and the Netherlands 1 attack. 142 victims died in terrorist attacks, and 379 were injured in the EU. Although there was a large number of terrorist attacks not connected with jihadism, the latter accounts for the most serious forms of terrorist activity as nearly all reported fatalities and most of the casualties were the result of jihadist terrorist attacks. Explosives were used in 40 percent of the attacks and women and young adults, and even children, are playing increasingly operational roles in committing terrorist activities independently in the EU. Most arrests were related to jihadist terrorism, for which the number rose for the third consecutive year. Also, the European Counter Terrorism Centre at Europol supported 127 counter terrorism investigations in 2016, which shows a clear indication of the growing range of jihadist activity.

These are some of the key findings of the 10th edition of the yearly EU Terrorism Situation and Trend Report (TE–SAT), which Europol has produced since 2007. Europol says that the TE–SAT, published last week, provides a concise overview of the nature of terrorism that the EU faced in 2016 and looks in detail at terrorist attacks that occurred: the largest number of attacks in which a terrorist affiliation could be identified were carried out by ethno-nationalist and separatist extremists (99). Attacks carried out by left-wing violent extremists have been on the rise since 2014; they reached a total of 27 in 2016, of which most (16) were reported by Italy. Although the total number of jihadist terrorist attacks decreased from 17 in 2015 to 13 attacks in 2016, of which 6 were linked to the so-called Islamic State (IS), 135 of the 142 victims of terrorist attacks in 2016 were killed in the 13 jihadist attacks.

Rob Wainwright, Europol executive director, said:”Never before has the need for information sharing become more evident as it has in the past two years, with the unprecedented form of jihadist terrorist attacks across Europe that led to 135 victims. In contrast to ethno-nationalist and separatist terrorism, and most manifestations of both right-wing and left-wing violent extremism, jihadist terrorism has an international character and therefore needs an international answer from cross-border law enforcement.”

Some of the findings reported in the TE–SAT 2017:

— Explosives: Explosives were used in 40 percent of the attacks. Even though terrorists use a wide range of readily available weapons, explosive devices continue to be used in terrorist attacks, due to their high impact and symbolic power.

— Technical trend: Regarding the potential use of alternative and more sophisticated improvised explosive devices (IEDs), the current trend in using weaponized unmanned aerial vehicles (UAVs), commonly known as a drone, in the Syria/Iraq conflict zone might also inspire other jihadist supporters and increase the use of this kind of tactic.

— Terrorism financing: 40 percent of terrorist plots in Europe are believed to be at least partly financed through crime, especially drug dealing, theft, robberies, the sale of counterfeit goods, loan fraud, and burglaries.

— Women and children: Women have increasingly assumed more operational roles in jihadist terrorism activities, as have minors and young adults. One in four (26 percent) of the arrestees in 2016 were women, a significant increase compared to 2015 (18 percent). In addition, the United Kingdom reported an increase in the number of women, families and minors engaging in the conflict in Syria/Iraq, and the Netherlands reported that more 40 children (age 0-12 years) have travelled to Syria and Iraq.

— Social networks: Jihadist groups have demonstrated a sophisticated understanding of how social networks operate and have launched well-organized, concerted social media campaigns to recruit followers and to promote or glorify acts of terrorism and violent extremism. The success in restricting terrorist activity online shows the impact of collaborative efforts between law enforcement, such as Europol’s Internet Referral Unit (IRU) and the private sector.