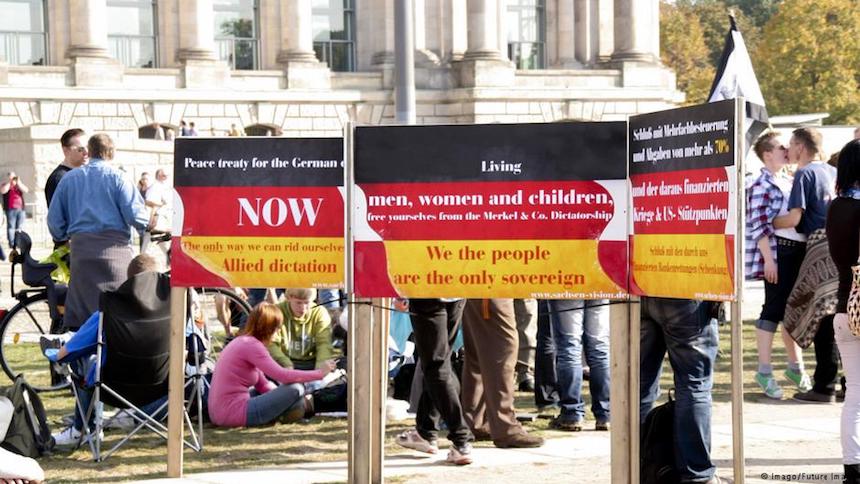 The German Federal Criminal Police (BKA) have reported that the followers of the right-wing Reichsbürger movement could engage in “extreme violence, including terror acts.”

The German newspaper Die Welt reports that a comprehensive report, compiled by German law enforcement services, concluded that the movement is more dangerous to public safety than other right-wing and nationalist German political movements.

The Reichsbürger movement – which is somewhat similar to the U.S. Sovereign Citizen movement – is not considered the most extreme right-wing politically, and its followers are not organized in the traditional sense. Rather, they adhere to the view that all post-Second World War German (and earlier, West German) governments have been illegitimate — not much more than a creation of the Allied forces to subjugate Germany.

Reichsbürger followers argue that West Germany, founded in 1949 after the end of the occupation of Germany by the Allies, was not a legitimate state because Germany never signed a peace agreement with the Allies. This illegitimacy applies to the government of united Germany, which came into existence in the fall of 1990. Moreover, these Reichsbürger followers say, Germany’s Basic Law requires a popular referendum to be transformed into a legitimate constitution — and Germany should be reconstituted in its 1937 borders.

Members of the movement have been engages in small-scale violence, mostly attacking police officers and soldiers.

It is this fact – that the more violent members of the movement have been targeting police officers and soldiers to highlight their resistance to the organs of the German state – which has led the BKAanalysts to conclude that the Reichsbürger movement has an even “higher escalation potential.”

“While Reichsbürger have an authoritarian understanding of the state and at a minimum consider officials fundamentally necessary, the sovereign citizens reject (foreign-)state paternalism and are in cases even prepared to defend their autonomy with armed violence,” Weltquoted police as reporting.

The German domestic intelligence service estimates that the Reichsbürger movement has 12,800 active members, of whom 800 the agency classified as classifies as right-wing extremists.

Both the federal and state police have recorded an alarming rise in the number and severity of crimes committed by Reichsbürger. The most recent numbers show that members of the movement have committed more than 13,000 offenses, about 750 of which were violent, with more than 700 of the violent acts targeting government employees.

The domestic intelligence agency says that even more alarming is the fact that some Reichsbürger are police officers themselves.

The BKA notes that the movement is positioned to exploit the racist backlash against the arrival of a large number of refugees – most of them Muslim — to recruit new members.

“In the view of extreme-right ideologues, German citizenship should be tied to an ethnically defined ‘people’s community’ in order to combat ‘genocide’ through ‘mass immigration,’” Welt reported, quoting the BKA.