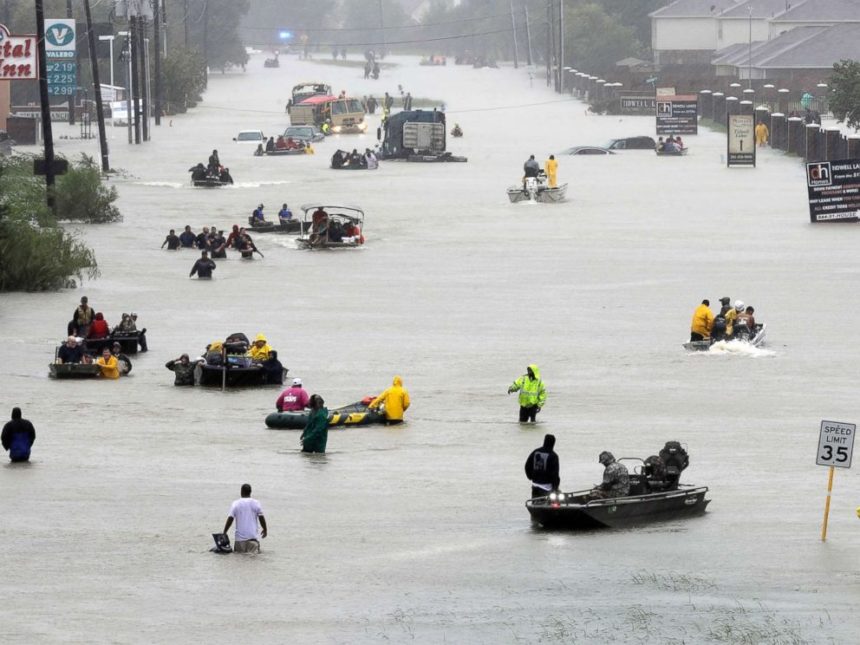 David Roberts wrote an important article in Vox (“Climate change did not ‘cause’ Harvey, but it’s a huge part of the story: 9 things we can say about Harvey and climate,” 29 August 2017).

He notes that raising the issue of climate change during a disaster may be regarded as insensitive. We should focus on the rescue efforts, the plight of those are suffering, and on the efforts made to alleviate this suffering.

Roberts also note that, more broadly, climate is not the central story here: There have always been hurricanes and floods in Texas. Texas’s coastal areas are vulnerable to severe weather because heedless development, sandy subsoil, and insufficient drainage, and these vulnerabilities will persist even in the absence of climate change (although man-made vulnerabilities can be reduced by laws and regulations which are informed by natural phenomena and characteristics; see Ilan Kelman, “Don’t blame climate change for the Hurricane Harvey disaster – blame society,” HSNW, 30 August 2017)).

“Climate is not central, but by the same token it is grossly irresponsible to leave climate out of the story, for the simple reason that climate change is, as the U.S. military puts it, a threat multiplier,” Roberts writes. “The storms, the challenges of emergency response, the consequences of poor adaptation — they all predate climate change. But climate change will steadily make them worse.”

Here are three of the nine points Roberts makes about the relationship between climate change and Harvey.

2) “Did climate change cause Harvey?” is a malformed question
Climate change does not cause things, because climate change is not a causal agent. “Climate change” is a descriptive term — it describes the fact that the climate is changing. What’s causing the changes is an increase in heat energy trapped in the atmosphere, due to greenhouse gases.

But saying that heat energy caused Harvey is also somewhat problematic. Let’s explain by way of an analogy.

For any particular instance of tripping and falling, there will be proximate causes — a slippery patch on the sidewalk, a moment’s inattention, whatever. Gravity is a background condition of anyone tripping, but no one would say gravity caused them to trip. If it’s true, it’s trivially true.

There is, to be sure, increasing sophistication in the science of attribution — that is, in distinguishing the climate signal from the “normal weather” noise. We’re learning to say things like, “There’s only a 5 percent chance the storm would have been this severe in the absence of climate change.”

3) Yes, climate change made Harvey worse
Thanks to the recent profusion of great climate journalists and communicators, this story has been well told already. Probably the best source is this Facebook post from climate scientist Michael Mann, but also see Chris Mooney, Robinson Meyer, John Schwartz, and Emily Atkin.

It’s a complex story, especially in its particulars, but in broad strokes, climate change made Harvey worse in three ways.

Finally (and most speculatively), one of the most damaging aspects of Harvey is how it’s hanging around in one place, thanks to weak prevailing winds. Mann recently published a paper suggesting that such near-stationary summer weather patterns are made more common by climate change.

All these factors contributed to the size and severity of the storm. Exactly how much they contributed will have to await peer-reviewed attribution science, but logic, experience, and measurements all make clear that Harvey’s damage was worse than it would have been absent recent changes in the climate. “The storm is a bit more intense, bigger and longer lasting than it otherwise would be,” climate researcher Kevin Trenberth told Mooney.

9) Climate change is part of every story now, including Harvey
Everything human beings do, we do in a climate (except hang out on the space station, I suppose).

Our climate has been in a rough temperature equilibrium for about 10,000 years, while we developed agriculture and advanced civilization and Netflix.

Now our climate is about to rocket out of that equilibrium, in what is, geologically speaking, the blink of an eye. We’re not sure exactly what’s going to happen, but we have a decent idea, and we know it’s going to be weird. With more heat energy in the system, everything’s going to get crazier — more heat waves, more giant rainstorms, more droughts, more floods.

That means climate change is part of every story now. The climate we live in shapes agriculture, it shapes cities and economies and trade, it shapes culture and learning, it shapes human conflict. It is a background condition of all these stories, and its changes are reflected in them.

So we’ve got to get past this “did climate change cause it?” argument. A story like Harvey is primarily a set of local narratives, about the lives immediately affected. But it is also part of a larger narrative, one developing over decades and centuries, with potentially existential stakes.

We’ve got to find a way to weave those narratives together while respecting and doing justice to both.

Harvey’s Losses “Would Reach $190 Billion or 1 Percent of the Nation's GDP”: Accuweather