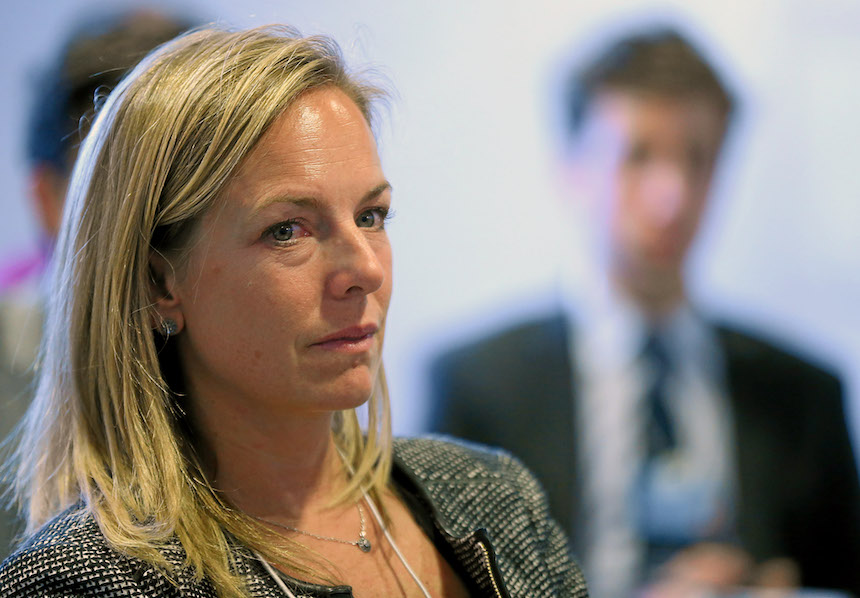 This week, Secretary of Homeland Security Kirstjen M. Nielsen traveled to Davos, Switzerland for the World Economic Forum where she met with international partners and industry leaders to discuss the importance of public-private partnerships in advancing a global security agenda.

In addition to preventing terrorists from traveling internationally, Nielsen discussed the importance of fighting radicalization at home. Terrorist groups have become highly networked online, allowing them to spread propaganda worldwide, recruit online, evade detection by plotting in virtual safe havens, and crowd-source attacks. DHS is finding more effective ways to identify terrorists, and working with international and industry partners to find innovative ways to detect and disrupt their plots. There is robust and ongoing engagement between the U.S. Government and the technology sector to increase efforts to counter terrorists’ use of the internet, including countering terrorist messaging online.

The World Economic Forum also launched the Global Centre for Cybersecurity, a public-private partnership formed to examine pressing cybersecurity challenges and devise solutions to global problems with direct impacts on the United States. Government and industry will use the unique convening ability of the World Economic Forum, drawing together stakeholders in a sense of shared responsibility, to improve the security and resilience of the cyber ecosystem. Nielsen affirmed DHS’s commitment to work closely with the Centre to determine priority areas of focus to ensure maximum impact.

Under Nielsen’s leadership, DHS is taking an increasingly active role in protecting Americans from the range cybersecurity threats, whether state or non-state based. Nielsen discussed the need for greater collaboration to better understand the risks facing the critical functions and services that support our economy and way of life. Recognizing that an organization’s risk doesn’t end at the network’s edge, among other efforts, DHS is prioritizing expanded information sharing with the private sector, a priority outlined in President Trump’s most recent National Security Strategy. This approach, rooted in the concept of collective defense, underscores the need to share as broadly as possible to dramatically reduce known threats and vulnerabilities, freeing up organizations to focus on more sophisticated threats.

During a roundtable discussion with industry leaders, Nielsen also discussed the continued threats facing soft targets and crowded places, and the importance of sharing leading practices and incentivizing security investments for these venues. Additionally, she stressed the importance of instilling a culture of awareness, vigilance, and preparedness across the general public.

The Secretary also had numerous conversations with global experts to discuss DHS efforts to assist persons fleeing persecution around the globe. DHS remains committed to being a partner to countries working to support displaced persons.